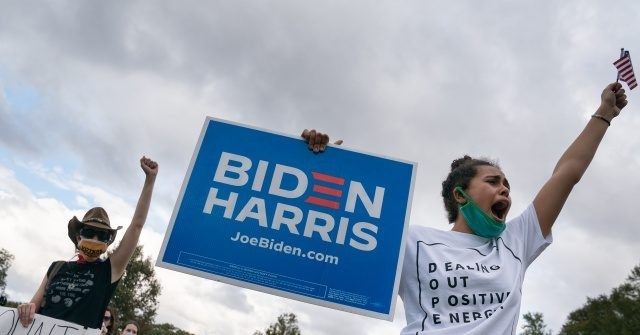 The PR policy adopted by Biden’s team is likely intended to maintain this female support by showcasing the migration of children and mothers. That focus helps divert media attention from the much larger migration of men who are seeking to win the jobs, wages, and apartments needed by the women’s husbands, siblings, and children.

Biden’s unpopular border rules allow separated men, women, and children to easily enter the United States via different doors, including the “Unaccompanied Alien Children” (UACs) door for young men who claim to be age 17 or younger.

Biden’s government-approved migration-by-separation inflow of workers, consumers, and renters is strongly opposed by 49 percent of men but only 36 percent of women.

The public opposition is even greater in an NBC poll of 1,000 adults, which reported just 33 percent approval and 59 percent disapproval. The ABC poll was conducted April 17-20.

The detailed data from the Washington Post‘s April 18-21 survey of 1,007 adults shows Biden’s support is strongest among non-white women.

But Biden’s strong support is doubled by the minority women, up to 21 percent nationally.

The Post‘s poll likely hides much higher support among black and Hispanic women, partly because prior polls show non-white males are more opposed to the labor migration that threatens their jobs and neighborhoods.

A June-July 2020 report by Rasmussen Reports showed just 12 percent of swing-voting “moderate” suburban women, and just 19 percent of all likely voters, agreed with business groups and Democrats that the government should “allow employers to import foreign workers to fill job openings instead of recruiting among these unemployed Americans.”

Yet the Biden administration is allowing many adult foreign workers into the U.S. while it showcases the logistical problem caused by the coyote-run migration of “Unaccompanied Alien Children” to their parents and relatives in the United States.

A law enforcement source within Customs and Border Protection reports the number of migrants who escaped without being apprehended exceeded 155,000 so far this fiscal year. The source says the rate now exceeds 1,500 “got-aways” per day along the U.S.-Mexico border.

Similarly, more than half of the UAC migrants delivered by coyotes are job-seeking youths aged 16 or 17 — and also include some men aged 18 and older. Many of the “family unit” migration consists of women with children who are seeking to join their spouse and fathers living and working illegally in the United States.

An April 22 article in the Chicago Sun-Times described how a group of young progressives welcomes economic migrants at the city’s bus station, including a taxi driver from Nicaragua:

The group in Chicago gave [a migrant named] Ariel a change of clothes and a cellphone with a one-month service plan because his phone was damaged by water. He was only in Chicago for a few hours and hoped to eventually reach South Dakota to reunite with his brother who paid for his bus ticket.

“I feel well,” said Ariel, who had been traveling by bus for four days when he arrived in Chicago. “Thanks to God, I’ve achieved the purpose I had.”

The illegal inflow of workers is complemented by a massive annual inflow of legal visa workers, including an extra 222,000 H-2B workers approved by Secretary of Homeland Security Alejandro Mayorkas in April.

Yet, the GOP’s donors, consultants, and campaign staffers prefer to sideline any mention of money and wages.

For example, an April 26 memo by multiple pollsters for the National Republican Congressional Committee portrayed the migration issue as merely a “border crisis,” not a threat to Ameicans’ livelihoods.

The memo for the committee, which relies on wealthy donors to help provide campaign funds for House GOP races, declared:

Similarly, pollster Frank Luntz was invited to brief GOP legislators about “messaging guidance on hot topics” during the GOP’s policy meeting in Florida on April 27. On April 25, Luntz described his pitch to Axios’s Mike Allen:

Complete the building of a physical barrier between the U.S and Mexico to ensure border security, and pass the DREAM Act, which will give the children of undocumented workers the chance to earn citizenship over time.

That amnesty-for-concrete pitch ignores jobs and wages, but it would help establishment lobbyists — aided by former President George W. Bush — to push for a bigger bill that could help lower wages and raise housing prices nationwide.

The establishment GOP’s refusal to talk about migration, jobs, and wages is endorsed by the progressives and business groups who favor the inflow and amnesty of Democratic-leaning migrants. For example, a March 9 FWD.us-funded polling memo advised worried legislators:

It is better to focus on all of the aforementioned sympathetic details of those affected [by an amnesty] than to make economic arguments, including arguments about wages or demand for labor. As we have seen in the past, talking about immigrants doing jobs Americans won’t do is not a helpful frame, and other economic arguments are less effective than what is recommended above.

“It is no surprise that you have a key element of the Republican Party that still takes its orders from the Chamber of Commerce and other business interests,” said Rob Law, the director of regulatory affairs and policy at the Center for Immigration Studies. “Immigration gets discussed in a silo as if immigration policy has no downstream effects on any other part of the economy or society as a whole,” he told Breitbart News.

The populist Republican Study Committee, led by Rep. Jim Banks (R-IN), however, does talk about migration, jobs, and wages.

Every GOP politician should talk about the jobs, wages, and the money, Law said. “The whole almighty dollar is something that is a universal language,” he said, adding:

People understand how challenging it is to get a job … Introducing any form of additional competition is unfair, and will always result in Americans losing out. The aliens — legal or illegal — win by getting U.S. wages for work that pays far less in their home country, and businesses win because they get to keep their payroll costs low, and maximize the profits that they reap  just for themselves.

Without guidance, he said, some voters “fail to connect the dots between border crisis, mass immigration — legal and illegal — and the negative impact that it has on jobs, health care, taxes, and the public services available to all Americans and to those that tend to be the most marginalized in society.”

Two more polls show the chaos of Joe Biden's half-open/half-closed border is damaging his ratings with independents & Latinos who recognize the harms.
GOP leaders are changing their talking points to maximize their gain from the progressives' ambition https://t.co/6xPvyCdevz