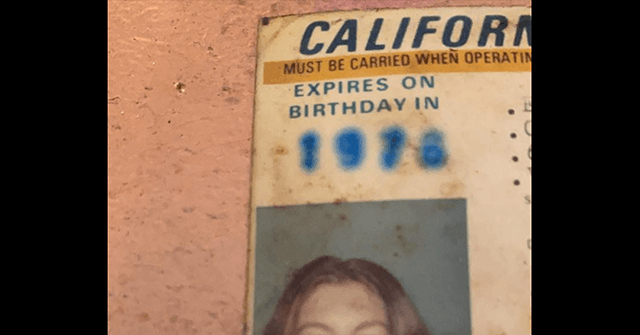 A woman from Ventura, California, got a wallet back she lost 46 years ago thanks to an employee remodeling the historic Majestic Ventura Theater.

The employee found the wallet tucked in a crawl space, the Associated Press (AP) reported Friday.

“I would have never imagined,” Tom Stevens said once he located it sitting among candy bar wrappers, ticket stubs, and soda cans.

Stevens said he used social media to try and find its owner after looking at the clues folded inside, which were photos, a 1973 Grateful Dead concert ticket, and a driver’s license for a woman named Colleen Distin. There was no cash inside it.

“Does anyone know Colleen Distin?” he asked in a post on the theater’s Facebook profile and gave users additional information to help solve the mystery:

Does anyone know Colleen Distin? While doing some maintenance we have found her wallet. To give you an idea how long ago…

Posted by The Majestic Ventura Theater on Tuesday, May 25, 2021

His boss, Loanne Wullaert, advised him to post the information online.

“We’re at almost 1,000 shares, a ridiculous amount of comments and then it went to all these other sites,” Wullaert noted Monday. “I think it’s cool that people care and are interested.”

Distin, who heard from several people online and also got a call about the post, responded on May 25 and said she was the wallet’s owner.

When she went to pick it up a few days later, she said it was like opening a “time capsule.”

So today Thomas Stevens got to meet Colleen Distin and return the wallet. It was a meeting of love and she is wonderful!…

Posted by The Majestic Ventura Theater on Friday, May 28, 2021

According to Distin, she lost her wallet in 1975 when the building was a movie theater. She believes it fell through a hole in her purse. At the time, the wallet contained a $200 check and family pictures.

“I remember calling the next day when I realized it was gone. They said no one found it, but to call back, which I did,” Distin recalled.

The wallet also contained photos of her mother, who passed away several years ago.

Distin said the positive response to her story compelled her to speak publicly about it.

“It says a lot about our society, that people are looking for a human story and something to feel good,” she stated. “People need to see the gratitude. I think there’s so much other negative stuff that I think this is what touched people.”