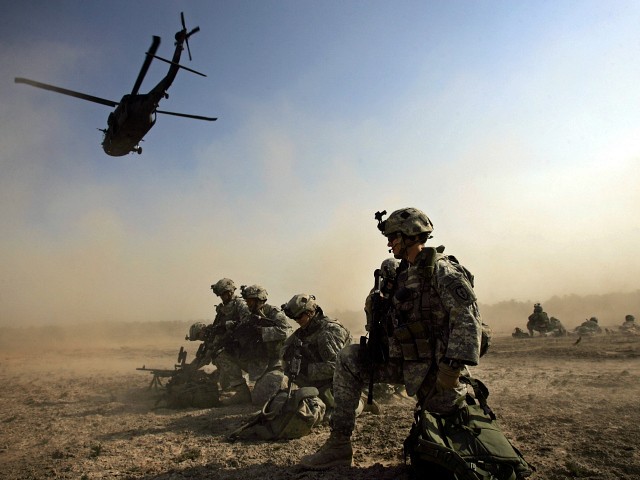 National Guard colonel and Green Beret Rep. Mike Waltz (R-FL) warned the Biden administration that they will have “blood on their hands” if they do not evacuate Afghan interpreters who helped American troops from Afghanistan as the war winds down.

“These are the interpreters who stood with us, who fought with us, that helped us not only engage with the populace, but were critical for us to fight alongside our Afghan army counterparts. So, they were a critical strategic asset but importantly — it’s important for people to understand when they stood up to stand with America and did so publicly, they didn’t just put their lives on the line, their entire families’ lives were put on the line,” he told Breitbart News in an interview this month.

President Joe Biden announced in April he would withdraw all U.S. forces from Afghanistan by a deadline of September 11, 2021. So far, the U.S. military has completed more than half its withdrawal.

However, Republican and Democrat lawmakers and Afghanistan War veterans have called on the Biden administration to evacuate Afghans who worked as interpreters for American and coalition forces in Afghanistan and who they fear will be targeted by the Taliban as soon as international forces leave.

The Taliban are hunting them down right now as we speak. We have an obligation, we have a duty to get them out. We are demanding that the Biden administration take action. And what’s so frustrating is that the Defense Department has said they’re ready to evacuate these people, the governor of Guam — where we have evacuated our South Vietnamese, South Korean, and other allies over the course of our history — have said they’re ready, all they’re waiting on is the green light from the White House. And I have run out of patience.

Then-Sen. Biden in 1975 did not support the evacuation of our South Vietnamese allies, and now we’re seeing him do next to nothing in terms of helping our local Afghan allies that stood with us against extremism, and look this is bipartisan frustration. Democrat, Republican alike, those veterans that fought with those people, whose lives were often saved by these people, are incredibly frustrating and we’re demanding that the Biden administration get them out. They will have blood on their hands if they don’t.

There are about 18,000 Afghans who have applied for a visa to the U.S. under the Special Immigrant Visa (SIV) program created for those who helped American forces and diplomats in the post-9/11 wars.

According to the Guam Daily Post, the U.S. evacuated Vietnamese and Kurdish allies to Guam in 1975 and 1996 respectively, while their visa applications were processed, and lawmakers such as Waltz say the same can be done now.

The administration reportedly intends to evacuate some SIV applicants already in the pipeline, but it is not clear when that may start.

Asked what he would tell Americans and Afghanistan War veterans as the war winds down, Waltz said, “That the war is not a failure. The fact that we haven’t had another 9/11, since 9/11, is a huge success. Those thousands of soldiers, including my own Green Berets that we didn’t bring home were fighting terrorism forward.”

“We were on the offense, we were keeping the pressure on them so that our families back at home could wake up breathing free air. And we have to not only remember their sacrifice but make sure we don’t have future sacrifices,” he said.

“So that’s why we need to keep the pressure on terrorism around the world. We have to stay on offense and it really, really concerns me, this policy of just getting out. I worry we’re repeating the mistakes of Iraq that the Obama administration made that led to the rise of ISIS and so much more sacrifice so that’s a fight that we’re having right now, but in the meantime, those who we lost — their sacrifice was not in vain, America is far safer for those sacrificed,” he said.