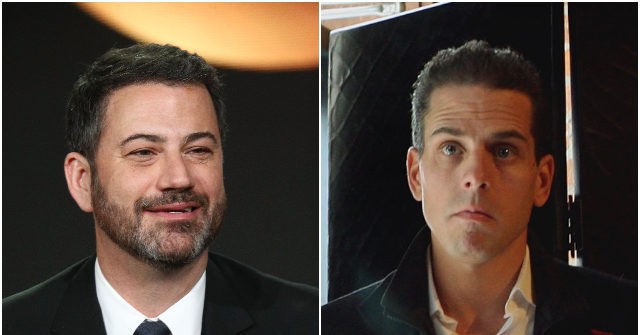 Hunter Biden took his reputation rehabilitation-book tour to ABC’s Jimmy Kimmel Live! on Thursday, where he spoke about his crack addiction but was spared serious questions about his laptop scandal or how he secured lucrative foreign deals while his father Joe Biden was vice president of the United States.

Left-wing host Jimmy Kimmel avoided asking Hunter Biden questions about the contents of his laptop or the murky foreign deals he allegedly made on behalf of the Biden family and his father. Instead, Kimmel lobbed mostly softball queries and gave the younger Biden a platform to talk about his triumph over crack addiction.

“Yeah, it was a journey, but thank God I made it through,” Biden said. “For me it was important to be completely honest about the entire experience.” He added crack “had brought me to a place I had never been to before… It was an absolutely awful experience at the end. And it was an awful experience throughout.”

Hunter Biden also praised his father, saying the president has a “genuine desire to take some of that toxicity” out of politics. Kimmel didn’t push back on the claim, failing to bring up instances when President Biden has insulted conservatives and Republicans.

Kimmel also asked Hunter Biden if it makes him “crazy” when he hears someone like Donald Trump Jr. saying that the only reason he’s had any success is because he’s “a Biden.”

Biden appeared uneasy with the question, awkwardly agreeing with Kimmel that “it is wildly comical. That is putting it lightly.”

Kimmel egged him on, asking if he had ever met Donald Trump Jr. Biden replied, “Not that I know of,” adding, “but I’ve been in some pretty rough places.”

The mainstream media refused to cover the Hunter Biden scandal in the months prior to the November election, though some outlets are belatedly acknowledging that the laptop contents are authentic.

Breitbart News senior contributor Peter Schweizer said Joe Biden is a “direct beneficiary” of Hunter Biden’s dealings, and detailed — in his bombshell investigatory blockbuster Profiles in Corruption: Abuse of Power by America’s Progressive Elite — and elsewhere how the lucrative deals Hunter executed “happened while Joe Biden was vice president of the United States. … and “once he became a central player in American foreign policy.”

The revelations about the Biden family’s lucrative foreign deals in Peter Schweizer’s book include: