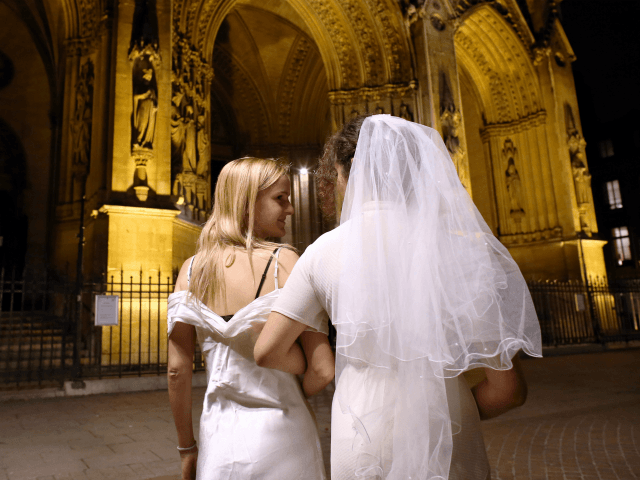 The conference of the Methodist Church of Great Britain has overwhelmingly backed same-sex marriages taking place in their churches, claiming in the new standing order “that marriage can be between any two people”.

The Methodist church revealed on Wednesday that the conference voted by a large margin — 254 in favour, 46 against — of a resolution stating that it “consents in principle to the marriage of same-sex couples on Methodist premises…  by Methodist ministers”.

Papers released show that the standing orders removed reference to the Methodist Church believing that marriage is “a gift of God” and altered the phase that “it is God’s intention that a marriage should be a life-long union in body, mind and spirit of one man and one woman” to “two people who freely enter it” — removing the specification of a Biblical marriage between one man and one woman.

Andrea Williams, chief executive of the campaign group Christian Concern, said in response to the vote: “I’m deeply sad to see the Methodist Church lose its way by no longer upholding marriage as God defines it.”

Mrs Williams continued: “God’s plan for sex is one man, one woman marriage. Every Christian should be ready to believe that God’s pattern for our lives is the best way for individuals and society to flourish. Every church denomination – including Methodists and the Church of England – should confidently proclaim this vision, rather than mirror the zeitgeist.”

The church, which has been in talks with the state’s Church of England for years to reunite, then followed the standing order with the confusing statement that “within the Methodist Church this is understood in two ways: that marriage can only be between a man and a woman; that marriage can be between any two people.”

Christian Concern’s head of public policy Tim Dieppe remarked on the two positions that the “Methodist Church decides it doesn’t know what marriage is. It had decided to affirm two contradictory views on marriage. If you will affirm a formal contradiction, then you’ll affirm anything, and you don’t really have any convictions.”

The Church Times says it has been informed that the first same-sex marriages could take place on church grounds by the Autumn of 2021.

In another resolution, the Methodist Church backed by a large majority a wish to “celebrate” couples living together who are not married, claiming the Church had an “important calling” to “point to the presence of God’s love within such relationships” — doing away with the concept of ‘living in sin’.

This is not the first left-progressive act by the Methodist Church of Great Britain, having already ordained its first transgendered minister in 2017.

The Church of England — the official state church of England and the home of the worldwide Anglican communion — forbids two people of the same legal sex to get married in their churches, though it continues to come under pressure from LGBT activists and clergy, including from the Bishop of Liverpool Paul Bayes who recently called for a “gender-neutral marriage canon”.

The move permitting same-sex marriages has formally been in the works since 2019, and while Wednesday’s decision could derail the reunion of the Church of England and the Methodist Church of Great Britain, the former does already allow those born of the same gender to marry — if one has legally changed their identity to the opposite sex.

“Trans people with gender recognition are already able to marry in our churches. Being transgender does not prevent someone offering themselves for ordained ministry and we have transgender clergy as well as laity,” the Church of England had reaffirmed in a statement related to the debate on amending the Gender Recognition Act.

At the same time, the Church of England claims that it will not challenge marriages it has performed if one in the heterosexual couple transitions to the opposite gender, make it, according to the logic of Pink News, a “same-sex marriage”.

The head Anglican church is also keen to celebrate a congregant’s sex change, with the House of Bishops advising clergy to use the “Affirmation of Baptismal Faith” to mark gender transitions and has expressed in very liberal in terms of its teachings on the fluidity of gender, such as that God is gender-neutral, and children at Church of England schools should be free to explore their “gender identity”.

Nigel Farage recently criticised the Church of England for failing to defend the sanctity of marriage when the Bishop of Manchester expressed more concern over Matt Hancock breaking social distancing rules when he was caught kissing his aide than by the fact two married people were having an affair.

“I know the church is full of all sorts of oddballs, but if the Church of England cannot stand up and defend the sanctity of marriage, I wonder what the point of it is?” Mr Farage had questioned.

“These appalling comments attacking the Clap for Captain Tom as ‘white nationalism’ show why the Church of England is collapsing.” https://t.co/9vYsjB4FxZ

Pinterest lost users in the second quarter, and the stock is plunging