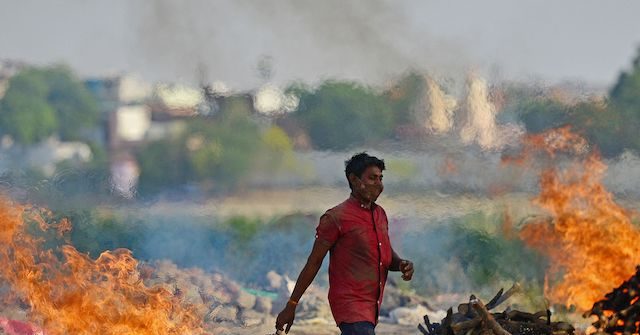 India’s Ministry of Electronics and Information Technology (MEITY) said on Sunday it asked Facebook, Twitter, and other platforms to remove posts that create “panic” about the coronavirus surge in India by spreading “fake or misleading information.”

Twitter confirmed to CNN on Monday it received the request from MEITY, which was evidently made on April 23, and complied by deleting at least some of the specified tweets. Facebook has yet to comment on the matter.

“When we receive a valid legal request, we review it under both the Twitter Rules and local law. If the content violates Twitter’s rules, the content will be removed from the service,” the statement from Twitter explained:

If it is determined to be illegal in a particular jurisdiction, but not in violation of the Twitter Rules, we may withhold access to the content in India only. In all cases, we notify the account holder directly so they’re aware that we’ve received a legal order pertaining to the account.

CNN noted that Twitter was criticized for banning user accounts during the political battle between Indian farmers and the Modi administration in February, only to reinstate them within hours after intense public criticism. Some of the tweets banned in India under the April 23 request, but still visible to foreign users, contained heated political criticism of Modi but no clearly false information about the coronavirus.

The Indian government’s decision to remove critical social media posts, which was first reported by Indian outlet Medianama, has inspired a new wave of criticism and is likely to raise questions about when American social media platforms should comply with takedown requests from foreign governments.

India is reeling from the coronavirus pandemic, with over 2,000 succumbing to the virus daily over the past few days and thousands contracting the infection. However, the Indian government seems more occupied with stifling criticism and gagging voices on social media.

Amnesty International (AI) on Monday called upon Twitter to resist censorship orders and “stop taking down posts critical of the Indian government’s mishandling of the Covid-19 [Chinese coronavirus] pandemic.”

The government is using the vague and ambiguous argument that the content is ‘fake news’ and ‘spreading misinformation,’ when in reality it is trying to silence any criticism against it. It is a tactic that has been used time and time again by governments across the world during the pandemic to avoid scrutiny and accountability.

The White House said on Tuesday that India’s censorship orders are not “aligned with our view of freedom of speech around the world.”