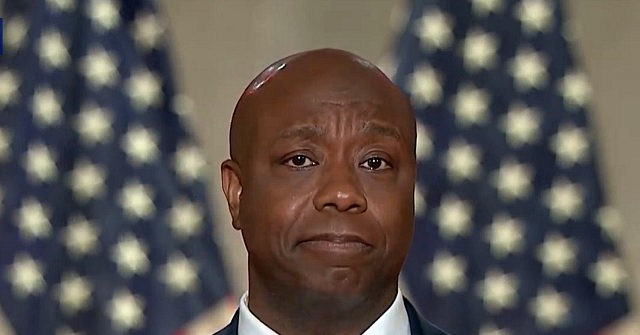 Scott delivered the Republican response to President Biden’s first address to a joint session of Congress. While Biden said there was “systemic racism” in the criminal justice system — a theme he has stressed since the Black Lives Matter protests last year — Scott said America was not defined by the worst of its history:

We are all in this together. And we get to live in the greatest country on Earth.

The country where my grandfather, in his 94 years, saw his family go from cotton to Congress in one lifetime.

So I am more than hopeful — I am confident — that our finest hour is yet to come.

Original sin is never the end of the story. Not in our souls, and not for our nation. The real story is always redemption.

Scott offered his personal reflections on racism — and the determination to overcome it:

Nowhere do we need common ground more desperately than in our discussions of race.

I have experienced the pain of discrimination.

I know what it feels like to be pulled over for no reason. To be followed around a store while I’m shopping.

I remember, every morning, at the kitchen table, my grandfather would have the newspaper in his hands. Later, I realized he had never learned to read it. He just wanted to set the right example.

He also added that he had experienced “a different kind of intolerance” — the racism directed at him from the left:

I get called “Uncle Tom” and the N-word — by ‘progressives’! By liberals!

Just last week, a national newspaper suggested my family’s poverty was actually privilege… because a relative owned land generations before my time.

(The latter was a reference to a Washington Post “fact check” that attempted to cast doubt on Scott’s story of rising from humble origins.)

Scott said that America needed to focus on solutions — but that Democrats did not want them:

Believe me, I know our healing is not finished.

In 2015, after the shooting of Walter Scott, I wrote a bill to fund body cameras.

Last year, after the deaths of Breonna Taylor and George Floyd, I built an even bigger police reform proposal.

But my Democratic colleagues blocked it!

I extended an olive branch. I offered them amendments. But Democrats used the filibuster to block the debate from even happening.

My friends across the aisle seemed to want the issue… more than they wanted a solution.

Scott noted that Democrats had used the filibuster — the same procedural tool they now derided as a relic of the Jim Crow era — to block his police reform bill.

Yet he concluded on an optimistic note: “But I’m still working. I’m still hopeful.”

Joel B. Pollak is Senior Editor-at-Large at Breitbart News and the host of Breitbart News Sunday on Sirius XM Patriot on Sunday evenings from 7 p.m. to 10 p.m. ET (4 p.m. to 7 p.m. PT). He is the author of the recent e-book, Neither Free nor Fair: The 2020 U.S. Presidential Election. His recent book, RED NOVEMBER, tells the story of the 2020 Democratic presidential primary from a conservative perspective. He is a winner of the 2018 Robert Novak Journalism Alumni Fellowship. Follow him on Twitter at @joelpollak.