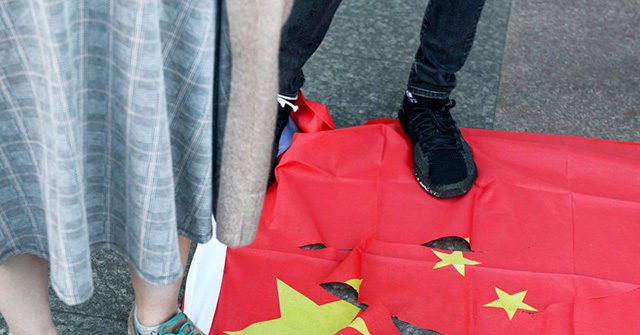 Taiwan is considering a bill that would ban public displays of the communist Chinese flag as part of a set of reforms aimed at asserting Taiwanese sovereignty, including a passport redesign officials said on Tuesday had proven extremely popular.

A bill recently proposed by a member of Taiwan’s anti-communist Democratic Progressive Party (DPP) — which opposes Chinese influence in Taiwan — would ban “raising, lowering, hanging, displaying, holding or brandishing a political or military flag of a hostile foreign power in public places. Those found guilty would be subject to fines of up to $1,782,” the Diplomat reported on April 24.

The bill would target the public display of the five-star People’s Republic of China (PRC) flag in Taiwan and require an amendment to Taiwan’s National Security Act to “criminalize certain actions deemed hostile to the nation,” according to the Diplomat. DPP legislator Wang Ting-yu first proposed the amendment in October 2020 with “support from 28 DPP lawmakers and Taiwan Statebuilding Party Legislator Chen Po-wei,” the Taipei Times reported at the time. Taiwan’s Statebuilding Party supports Taiwanese independence.

Taiwanese national security officials have reviewed the proposal and recommended last week “criminalizing the display of the five-star People’s Republic of China (PRC) flag under social order law” rather than through an amendment to Taiwan’s National Security Act, the Taipei Times reported on April 20.

“The PRC flag problem has existed for a long time, but amending national security law is not the appropriate way to impose criminal liability for contraventions of ‘national identity,'” Taiwanese security officials said, according to the newspaper.

The officials instead recommended altering Taiwan’s Social Order Maintenance Act “to legislate against such acts” as displaying the Chinese national flag “with fines of NT$10,000 [$358] to NT$50,000 [$1,786].”

“The [Taiwanese] National Security Act covers serious felonies,” an official said last week, according to the Taipei Times, adding that “it is not suitable for criminalizing the display of a flag.”

Though Taiwan operates successfully as an independent, sovereign nation, Beijing considers Taiwan a “renegade” province and has vowed to “reunify” the island with China by force if necessary. Taiwan is an island located on the northeastern edge of the South China Sea.

“The Chinese national flag is not commonly displayed in Taiwan, where a fractional minority of the population expressed support for unification [with China]. Among the general public, pro-unification protesters and activists are generally ignored or ridiculed,” the Diplomat noted on April 24.

Several members of Taiwan’s minority Chinese Nationalist Party (KMT) spoke out against the bill banning the display of the Chinese national flag in Taiwan when the legislation was first proposed last fall.

“There is no law [in Taiwan] defining China as an enemy,” KMT Legislator Chen Yu-jen said on October 2, as quoted by the Taipei Times. Banning the PRC flag in Taiwan “would require amendments to the [Taiwanese] Act Governing Relations Between the People of the Taiwan Area and the Mainland [Chinese] Area,” Chen said.

“It would be more reasonable to ask people not to wave the flag or sing the national anthem of an enemy country,” she said.

“Despite China’s threat to Taiwan, banning its flag would only be possible if a law defines China as an enemy country [of Taiwan],” he said last October.

The bill to criminalize public displays of the PRC flag in Taiwan represents a larger campaign by Taiwan’s government in recent months to reassert Taiwanese sovereignty by minimizing the presence of Chinese cultural symbols in the nation.

Taiwan’s Ministry of Foreign Affairs said on April 27 applications for Taiwanese passports had nearly doubled “with more than 90,000 applications received” since the bureau redesigned national passports to emphasize Taiwanese sovereignty in January.

The ministry debuted a new passport design on January 11 that “removed the English-language words ‘Republic of China’ from the cover but retained the Chinese-language equivalent — and featured the word ‘Taiwan’ more prominently,” according to the Taipei Times. “Republic of China” is Beijing’s official name for Taiwan.

The increase in applications for new Taiwanese passports since January “was evidence of public support for the new design,” Taiwan’s foreign ministry said Tuesday.