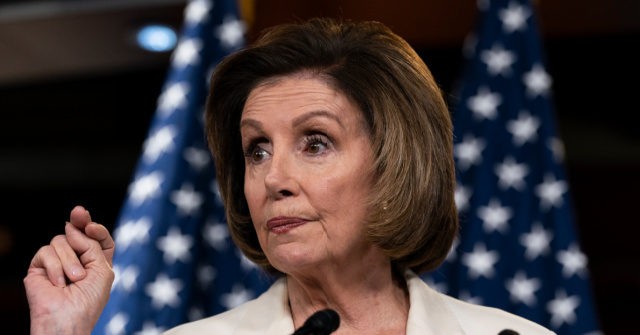 Some moderate Democrats are warning that they will not support the radical left’s spending package, which includes demands for “reconciliation instructions for trillions of dollars in additional spending,” according to reports.

Oregon Rep. Kurt Schrader (D-OR), a member of the Blue Dog Coalition, said he is planning to vote against the proposal, and another moderate Democrat, who requested to remain anonymous, said the same, according to Roll Call. That prompts concerns for Democrats, as House Speaker Nancy Pelosi’s (D-CA) caucus holds a slim majority in the lower chamber.

According to Roll Call, the 81-year-old Speaker can “only lose two more Democratic votes and still adopt the budget resolution in her narrowly divided 220-211 chamber, since no Republicans are likely to vote for it, as budget resolutions are designed to be partisan wish lists”:

Progressives worry that Senate and House moderates who helped negotiate the bipartisan deal for $579 billion in new infrastructure spending won’t provide the votes needed to pass a reconciliation package that could top $5 trillion in additional spending.

The bipartisan deal is mostly focused on physical infrastructure, like roads, bridges and transit, as well as related things like broadband and clean energy. The reconciliation bill would include potentially more infrastructure spending, as well as funding for other Biden priorities like climate initiatives, child care and education assistance and national paid leave.

Biden later said, however, that he would not sign a bipartisan infrastructure deal crafted with moderate Republican senators unless it is accompanied by a partisan funding package with entitlements for “human infrastructure.”

“If they don’t come, I’m not signing it. Real simple,” Biden told reporters.

“We need physical infrastructure, but we also need the human infrastructure as well,” Biden he continued, adding, “We’re going to have to do that through the budget process and we need a fair tax system to pay for it all.”

On Thursday, Pelosi affirmed she will essentially blow up the infrastructure deal if the Senate also does not pass a reconciliation bill filled with grossly partisan agenda items.