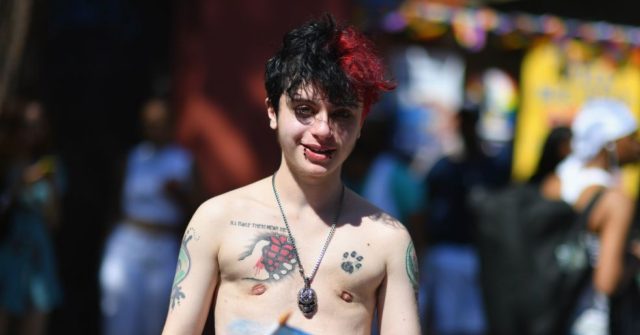 President Joe Biden and gay and transgender members of his administration celebrated Pride month last week by ripping states that have protected women’s sports from men who claim to be transgender.

“These are some of the ugliest, most un-American bills I’ve seen and I’ve been here a long time,” Biden said during a Pride reception at the White House.

“There’s an especially dangerous political strategy arising in some states right now as some politicians try to gain advantage by picking on transgender kids,” Buttigieg said. “Some of the most vulnerable people in this country.”

As Breitbart News reported, Buttigieg suggested that politicians promoting bans on transgender athletes competing against women are to blame for causing more transgender suicides, calling it a “matter of life and death” and of “national character.”

Transgender activists continue to pressure parents and politicians with the threat of suicide should young people who claim to be transgender not receive total affirmation of their new identity.

Significant research and study, however, has found that transgender medical interventions, such as puberty blockers and cross-sex hormones, and sex transition surgeries do not prevent suicide or improve mental health in gender dysphoric young people.

Trans Mission: What’s the Rush to Reassign Gender? is a new documentary film by the Center for Bioethics and Culture.

In the film, one mother shares “how doctors scared her into thinking her daughter would commit suicide unless they let them put her on puberty blockers,” a recent press release highlighted.

Still, Hruz said, “There’s a very good reason to be concerned about the outcome specifically, that some of the largest studies that have been done with the longest follow-up have shown that suicide rates remain markedly elevated after you undergo these affirmation interventions.”

In September, the American Journal of Psychiatry released a correction to a 2019 Swedish study which drew as its primary conclusion that individuals who claim to be transgender experience mental health benefits following gender-affirming surgeries.

An article at the Public Discourse by family physician Dr. Andre Van Mol of the American College of Pediatricians, endocrinologist Dr. Michael Laidlaw, and psychiatrists Dr. Miriam Grossman and Dr. Paul McHugh noted the authors of the original study retracted its conclusion after numerous requests for a reanalysis of the data led to the corrected findings.

After the data were reanalyzed, the Swedish study’s conclusion was that neither “gender-affirming hormone treatment” nor “gender-affirming surgery” decreased the need for mental health services of those claiming to be transgender.

In a review of the study, adolescent psychiatrist Sven Román and his colleagues concluded that “investigators distort gender dysphoria.”

“…there is currently no scientific support for gender-corrective treatment to reduce the risk of suicide.”https://t.co/E88v89un5p pic.twitter.com/zTGeAiavGC

The study had originally concluded the age limit for transgender surgeries should be lowered in order to prevent suicides among young people.

“The study shows that the number of visits to psychiatric care decreases after surgical treatment, but it has serious methodological deficiencies,” Román and his colleagues wrote, concluding after an analysis of those issues that “there is no scientific evidence that suicide risk is higher in adolescents with gender dysphoria waiting for investigations and medical treatment than in peers with gender dysphoria.”

“The brain is not fully developed until about 25 years of age,” the authors added. “Therefore, it is completely unreasonable to children to be able to make decisions on this issue.”

Researcher and author Abigail Shrier wrote in an op-ed at the New York Post in June 2020, of the influence on vulnerable young girls by “transgender gurus” on social media and in schools “celebrating” transgender ideology:

I have interviewed over four dozen families whose teen daughters became caught in this current. Their stories follow a pattern: A girl never expresses any discomfort with her biological sex until puberty, when anxiety and depression descend. The girl struggles to make friends. She immerses in social media and discovers transgender gurus. Or her school holds an assembly celebrating gender journeys, or hosts a Gay-Straight Alliance club pushing gender ideology. At first, she tries out a new name and pronouns. Her school encourages her, keeping all this a secret from her parents. Then, she wants more.

In 2018, researcher Lisa Littman saw results similar to what Shrier observed, namely, that, first, most teens “come out” as transgender after belonging to a peer group containing multiple “trans” friends, and, second, that most young people claiming to be trans have already been identified with at least one mental health disorder.

In a recent interview with Matthew J. Franck, contributing editor of Public Discourse, McHugh asserted it is the transgender industry misrepresenting the serious consequences of puberty blockers and cross-sex hormones in children that is the true “matter of life and death.”

McHugh observed that if children who believe they should be the opposite sex are permitted to go through puberty normally, without drugs to suppress the process, 85 to 95 percent of them will accept their biological sex.

“But if you give them the puberty blockers at age nine or ten, only 5 or 10 percent at the end of that time will say ‘I don’t want to go on further,’” he warned. “They always want to go on further. Something has changed in them. One of the things that change must be the way their brain is shaped when this triggering comes along for puberty. It gets thwarted.”

“And the idea that it’s all reversible, that’s still very debatable,” McHugh asserted.

But transgender activists continue to fear-monger, with statements similar to those of Biden and Buttigieg, suggesting that refusal by parents and state lawmakers to acquiesce to their agenda is “picking on transgender kids” and could result in more suicides. The transgender medical industry has grown up around social and medical transition and, aided by public schools and Planned Parenthood, is awash in cash.

Shrier explained further how quickly decisions about transgender medical and surgical interventions are made for young people:

Public schools peddle gender ideology with a fervor that would make a preacher blush. Transgender social-media gurus tout the euphoria testosterone produces, and Planned Parenthood is one of the largest suppliers of testosterone — and they do apprise of the risks, but on an “informed consent” basis. (Meaning, no therapist note is required and you leave the clinic with a very serious drug based essentially on the patient’s self-diagnosis.) Hundreds of plastic surgeons are happy to offer medically unnecessary double-mastectomies to girls as young as 16 without so much as a therapist’s note.

Attorney and researcher Jane Robbins summed up at the Federalist the trans activists’ attempts to get their hands on young people.

“The industry emotionally blackmails [parents] by warning that if denied access to experimental interventions, their children will kill themselves,” she wrote, adding:

The threat is so frequent, it has become a macabre cliché among trans-industry practitioners: “Would you rather have a live son or a dead daughter?”

Faced with this bleak choice, even sensible parents can be bullied into submission. But is that really the choice? Does evidence show that trans-identifying kids are uniquely at risk for suicide? Thankfully, no.

As Robbins wrote, “There is no long-term evidence that puberty blockers, cross-sex hormones, or ‘transition’ surgeries prevent suicide.”

“On the contrary, the best long-term research shows that people who go through medical transition kill themselves at a rate many times greater than the general population,” she observed.

As for the criticism by Biden and Buttigieg of state laws banning biological men from competing in women’s sports, the American College of Pediatricians noted in a position statement in March:

Long-term research on elite athletes has consistently shown that when matched for training, males outperform females in regard to speed and strength. Though predominantly related to hormones, these differences are also the result of sex-differential gene expression.

Genetics is the reason a male who self-identifies as female remains male, and explains why giving estrogen to a male does not transform him into a female. While it is true that a male who uses estrogen after puberty will lose muscle strength and impair other aspects of his physiology, he does not alter his genetics; he remains male at the cellular level in all body systems.In 2019, researchers concluded that male athletes who identify as female hold an “intolerable” advantage over women.

In 2019, researchers concluded that male athletes who identify as female hold an “intolerable” advantage over women.

Three professors — two in bioethics and one in physiology — noted the International Olympic Committee (IOC) was allowing “transgender women” to compete against biological females if their testosterone is below 10 nmol/L. However, even that level is “significantly higher” than that of biological females, they asserted.

The authors cited research demonstrating that “healthy young men did not lose significant muscle mass (or power) when their circulating testosterone levels were reduced” for 20 weeks to meet the IOC’s guidelines.

The researchers also stated that “indirect effects of testosterone will not be altered by hormone therapy.”

“For example, hormone therapy will not alter bone structure, lung volume or heart size of the transwoman athlete, especially if she transitions postpuberty, so natural advantages including joint articulation, stroke volume and maximal oxygen uptake will be maintained,” they explained.

“We conclude that the advantage to transwomen afforded by the IOC guidelines is an intolerable unfairness,” the professors stated.