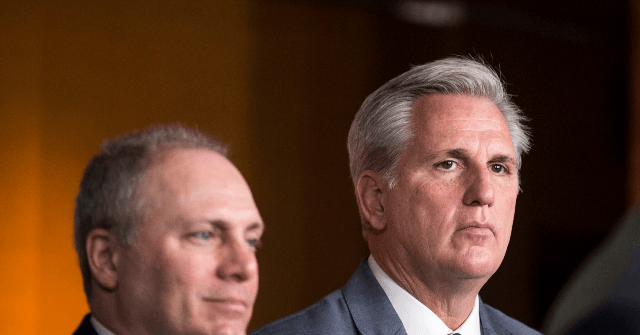 House Republican leadership sources told Punchbowl News that fewer than 10 House GOP lawmakers would vote for the bipartisan infrastructure deal if it were to come up for a vote.

Although there tentatively remains support from Republicans and Democrats in the Senate for a bipartisan infrastructure deal, it remains unclear how many Republicans could back such a bill.

House Speaker Nancy Pelosi (D-CA) has a historically slim majority, and the bipartisan deal could fail to get support from far-left lawmakers such as Reps. Alexandria Ocasio-Cortez (D-NY) or Rashida Tlaib (D-MI).

Reps. Brian Fitzpatrick (R-PA) and Josh Gottheimer (D-NJ), the co-chairs of the Problem Solvers Caucus, and four Democrats and Republicans, released a statement Tuesday saying they had a constructive dialogue with the Joe Biden administration about infrastructure.

Today, Members of the bipartisan Problem Solvers Caucus had a productive conversation with the White House on addressing the enormous need for new infrastructure and the backlog of deferred maintenance to rebuild a stronger America. The Caucus has been working closely with our Senate colleagues on integrating our ‘Building Bridges’ framework with their package.

We have built a strong coalition to ensure we can pass a bipartisan infrastructure package through both Chambers. We cannot miss this historic opportunity to show the American people that both sides of the aisle can work together to deliver real results for the nation.

“We look forward to continuing our discussions with the Biden Administration in a bipartisan, bicameral manner on this physical infrastructure package to ensure that we can move this across the finish line,” the two lawmakers added.

VIDEO: Crowder opens up about the time he learned he was on an ISIS kill list

'Are you trying to hide something?': Reporter presses Jen Psaki for the number of breakthrough COVID cases among White House staff

VIDEO: Crowder opens up about the time he learned he was...

'Are you trying to hide something?': Reporter presses Jen Psaki for...

VIDEO: Crowder opens up about the time he learned he was...

'Are you trying to hide something?': Reporter presses Jen Psaki for...