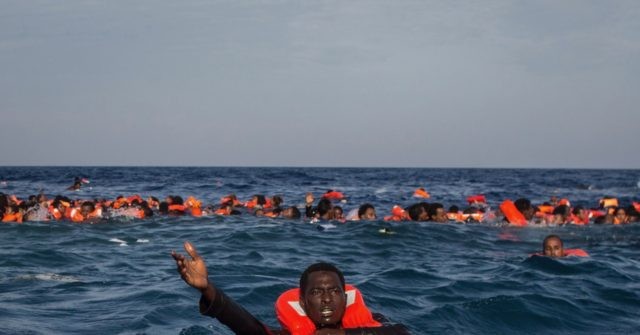 A pregnant woman is among seven who drowned off the coast of the Italian island of Lampedusa late Tuesday night, as the ramifications of the vicious people-smuggling trade have led to its “umpteenth tragedy”.

A shipwreck five miles off the coast of Italy has taken the lives of at least seven women — one of whom was pregnant — with another ten migrants, including some children, said to be still missing in the Mediterranean Sea, according to the 46 survivors.

Following the latest trafficking deaths, the mayor of Lampedusa, Totò Martello, demanded a meeting with Italian President Mario Draghi, saying per La Repubblica: “This umpteenth tragedy in the Mediterranean is heartbreaking. What else must happen to make Italy and Europe understand that we cannot go on like this?”

Agrigento Prosecutor Luigi Patronaggio has opened up an investigation into the case, saying that the first task will be to determine whether any smugglers were hiding among the shipwrecked migrant survivors.

The deaths came amidst a heavy night of boat migration to the island of Lampedusa, with some 256 illegals landing on Tuesday evening, adding on to the 136 who arrived on Monday.

As is typical with the Mediterranean landing spots for illegal migrants, the local migrant holding centre has been overwhelmed with more than 650 people being crammed into the facility, which was only made to accommodate 250.

The island faced similar overcrowding issues last summer when it ran out of space to quarantine migrants who potentially were infected with the Chinese coronavirus.

It is believed that at least 700 migrants have died this year in the Mediterranean after being put onto often unreliable and dangerous boats by people smugglers in Africa. Since 2014, some 20,000 people are believed to have died trying to make the dangerous journey to Europe.

So far this year, at least 19,000 illegal boat migrants have reached Italy.

It has also been alleged that the people smugglers deliberately put pregnant women in dangerous conditions to win sympathy for migrants in Europe and to improve the chances of rescue missions being launched. This in turn improves their business model.

During the height of the Europe Migrant Crisis in 2016, the island of Lampedusa saw 15,000 migrants land in just one week. Earlier this year, the beleaguered island saw 1,200 illegals land on its shores in just one day.

Save 25% on this evaporative air cooler makes sure you’ll stay...