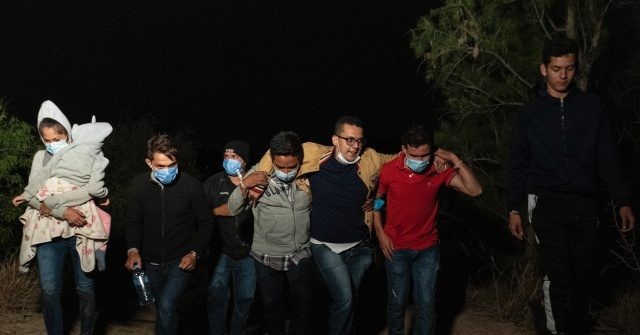 Border crossers who tested positive for the Chinese coronavirus are continuing to travel into the United States after being released by the Department of Homeland Security (DHS), the New York Times reports.

Many border crossers who test positive are skipping out on their quarantine and boarding buses and getting on planes to travel inside the U.S. interior.

Migrants who have a positive result are transferred to a shelter operated by the city. Others spend a night or two at the respite center and then board planes or buses to their destinations around the United States. Some of them could well have infections contracted in Border Patrol facilities that did not register on tests during the brief time they spent at the respite center, immigrant advocates warned, and could unknowingly expose others as they travel to join friends and family elsewhere in the country. [Emphasis added]

Andrea Rudnik, whose nonprofit organization, Team Brownsville, provides aid to a hotel for coronavirus isolation in Brownsville, Texas, said many migrants who tested positive had disappeared before their mandatory separation period was up. [Emphasis added]

“They want to leave,” she said, “and if they realize, ‘Hey, I can just take a taxi from this hotel back to the bus station and get out of there,’ then they’ll do it.” [Emphasis added]

DHS officials confirmed to the Times that five percent of single adult and family border crossers tested positive for the coronavirus after the agency released them into the U.S. interior since the beginning of March.

Likewise, about 12 percent of all Unaccompanied Alien Children (UACs) in DHS custody have tested positive for the coronavirus.

After a border crosser tests positive for the coronavirus — either in DHS custody, because they showed obvious symptoms, or following their release by DHS — they are put up in hotel rooms or shelters to quarantine for 10 days at most.

The Times reports that hundreds of border crossers are being housed in each of the hotels where they are placed after testing positive. In Holtville, California, for instance, roughly 200 border crossers were quarantining at one time — many from Cuba, Brazil, Ecuador, and India.

For months, Breitbart News has chronicled the Biden administration’s insistence on releasing tens of thousands of border crossers into the U.S., many of whom end up testing positive for the coronavirus afterward and keep traveling into the nation’s interior.

Last week, Texas Attorney General Ken Paxton filed a lawsuit against DHS, alleging that the administration is creating a coronavirus crisis at the U.S.-Mexico border and potentially infecting Americans with the virus by exempting border crossers from testing and quarantine requirements that Americans are subjected to.

The Center for Disease Control’s (CDC) Title 42 order, the only border control left in place by the Biden administration from former President Trump, has allowed federal immigration officials to quickly detain and return border crossers to their native countries.

As Breitbart News reported in March, though, top DHS officials have urged Biden to use Title 42 authority less and less in an effort to eventually phase out its use, which experts have said would cause an unprecedented level of illegal immigration and a massive public health crisis at the southern border.

Democrats for months have asked Biden to stop using Title 42 and instead release all border crossers into the U.S., even without coronavirus tests, to spare foreign countries from the virus’s spread. This month, Rep. Joaquin Castro (D-TX) requested Biden end Title 42 use.

Alaska teacher on leave after suggesting George Floyd would still be...

Alaska teacher on leave after suggesting George Floyd would still be...