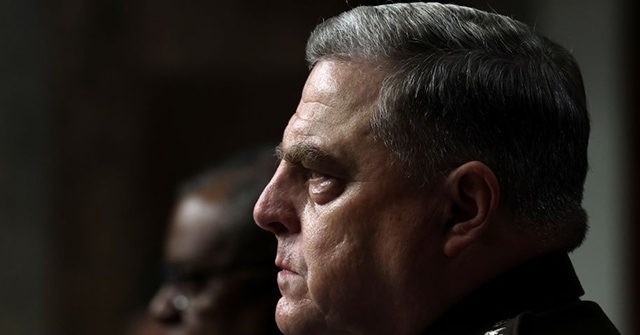 After claiming to be “personally” offended over accusations the drag queen-loving U.S. military is woke, Chairman of the Joint Chiefs of Staff Army Gen. Mark Milley said, “I want to understand white rage, and I’m white.”

Oh, okay, because that’s not woke at all.

This happened during congressional testimony on Wednesday. Then he added this bone-chilling explanation: “What is it that caused thousands of people to assault this building and try to overturn the Constitution of the United States of America?” The implication being it was “white rage.”

Okay, just for starters, only an idiot would see skin color as a factor in the January 6 protest in and around the U.S. Capitol (which was mostly peaceful, per the corporate media’s own definition) January 6 protest in and around the U.S. Capitol, but here’s a question that should put a chill up everyone’s spine… Why is the U.S. military brainwashing our troops with the openly racist ideas behind Critical Race Theory that push the wild and wicked claim people with white skin are inherently evil and racist oppressors?

I’ll tell you what this sounds like to me… Like the U.S. military is studying up on its next enemy, and not to “understand” this enemy… No, to dehumanize this enemy in a way that will justify making war against this enemy.

This is exactly what happened at Waco in 1993. For 51 days, the establishment media, the FBI, and ATF launched a public relations campaign — as well as an internal campaign among rank-and-file law enforcement — to dehumanize David Koresh and his followers into dangerous others, into Christian-tard cartoons, which justified the disastrous assault that followed and the unnecessary deaths of 76 Americans, including 25 children.

If the idea of the U.S. military teaching the lie that everyone with white skin is irredeemably evil is not outrageous enough for you, keep in mind that it’s illegal for the U.S. military to act as a domestic police force. Nevertheless, Milley sure seems to sense a mortal threat to the “Constitution of the United States of America” based only on a person’s skin color.

When asked why Critical Race Theory is being taught in the military, Defense Secretary Lloyd Austin said, “The purpose was to help to have a discussion with our troops and our leaders on the issue of extremism.” He added, “And that was very productive. And, again, we were focused on those behaviors that don’t–that are not in congruence with our values in the military.”

Our own military is teaching its troops that everyone with white skin is a genetic freak and mortal threat.

This is not a drill.

The Waco Playbook is back in action, and this time the fascists have expanded it against all of us.