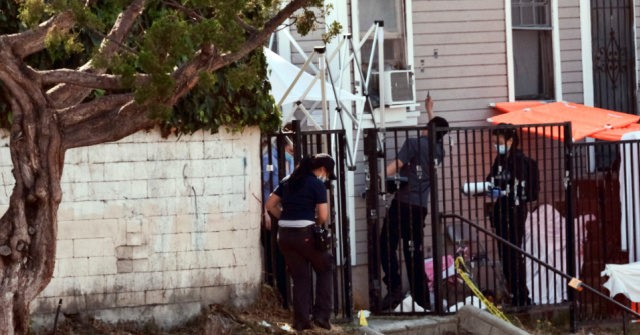 He’s slashing the number of prosecutors in the unit by more than a third, from 40 to 26…

It gets much worse…

Gascón said the unit’s core mission will be to approach gang violence, and I quote… “through a public health lens.”

“The goal here,” he added, “is eventually, not only for the D.A., but also the police, to become sort of a supporting role and have the community and county public health be the leading role.”

To make this happen, the far-left Los Angeles Times reports, “he plans to partner with gang intervention workers and service providers, though he didn’t name specific vendors.”

If that’s not insane enough, this lunatic Gascón is doing this– again according to the Times, “when the number of homicides in Los Angeles rose above 300 for the first time in a decade last year.”

What’s more, “the LAPD considers many of those slayings to be gang-related. At least 60 of the 105 homicides that had taken place in Los Angeles as of April 20 were believed to be connected to gang activity[.]”

This is the problem with giving the left an inch…

You agree with the left on the issue of gay marriage and before anyone can say,“I do,” there’s a naked, mentally ill, middle-aged guy with five o’clock shadow sharing a locker room with your daughter. This one I did not fall for, by the way. I have always opposed same-sex marriage and always will. And this slippery slope is not slipping. You just wait until the lawsuits start hitting Christian churches (never mosques) that refuse to perform same sex marriages. That’s next. Bet on it.

As far as this lunacy in Los Angeles, once again – and I did fall for this one – we gave the left an inch on criminal justice reform and now this psychopath has grabbed a mile to treat gang murders and gang violence like a “public health issue.”

Here’s what I fell for… We were told that criminal justice reform would focus on non-violent criminals; that it was time to stop incarcerating people for long periods for non-violent crimes. I still agree with that. I still believe we have far too many people in prison. I still believe many American prisons are a blight on our national conscience. The idea that the state locks people up and cannot keep them safe from violence and sexual assault is beyond a disgrace. Does that not seem like a reasonable place for right and left to meet and agree?

But it was all a ruse so the left could empty our prisons and allow gangs to run the streets again, just like they did in the 70s and 80s…  Which is the long way of saying Gascón’s approach has already been tried and failed, only back then it was called “rehabilitation.”

Well, what we once again have here is a populace getting exactly what they voted for. George Gascón was just elected district attorney on a platform of justice reform, so I hope everyone in Los Angeles is happy with that brilliant decision.