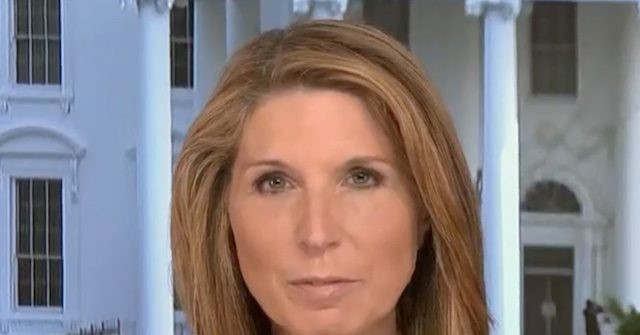 MSNBC anchor Nicolle Wallace said Tuesday on her show “Deadline” that the “sick Republicans Party is just full of grease and sugar and fat and junk.”

Wallace said, “Another day, another heaping serving of GOP misinformation. Another demonstrably false myth ping-ponging around the conservative media echo chamber. This one started with a single photo from a Reuters photographer of Vice President Kamala Harris’ book, ‘Supers Heroes Are Everywhere,  propped up against a backpack by a migrant shelter in California. The New York Post slapped that photo on its front page, and its webpage homepage alleging falsely, without evidence or attribution, that young migrants in the shelter were given the book as some kind of welcome kit. The Post has since deleted the story from its website, but from that front page story and picture, Fox News, of course, picked it up, repeating the false claim.”

She concluded, “I always make this analogy when I’m talking to my team…I was so affected by that documentary ‘Supersize Me,’ I of what happens to one human body when he lived on McDonald’s food for all three meals. I really think that is the best analogy I can come up with for how sick the Republican Party is, just full of grease and sugar and fat and junk.”