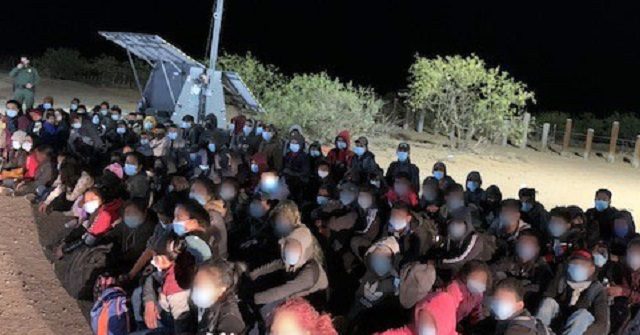 President Joe Biden’s border chief allowed roughly 31,000 global migrants into the United States in May, according to data released by the Department of Homeland Security.

The inflow from distant regions of the globe, such as India, Africa, South America, Europe, and Asia, is 62 times the 500 people accepted in May 2020.

Once in the United States, the migrants use their cellphones to boast of their success to many other migrants left behind in their poor home countries.

An additional 8,000 global migrants were blocked by the Title 42 healthcare barrier.

Many more global migrants are coming, in part, because of the videos shared by prior migrants. Michael Yon, an American journalist. want into the Panama jungle to describe the rising flow of migrants trying to reach the United States. In a May 29 report, he wrote:

We passed about 16 boats full of migrants yesterday deep in the Darien jungle. One crashed and capsized similar to this painting. We had already passed the waving migrants and did not see them crash after we passed them. We were going upstream deeper into the jungle. They were going downstream toward United States, ultimately. Most appeared to be African or Haitian.

Rep. Tom Tiffany (R-WI) visited one of the jungle trails in Panama used by international migrants, and told the June 2 Washington Times:

People were coming out of there, some could barely walk, most people were limping. Some people looked like they were about to get gangrene … “I saw a woman being wheelbarrowed into that health facility. We heard stories from villagers of babies washing down the river that had died en route through the Darien Gap. The human misery is awful.

The official numbers announced by DHS do not include the so-called “got-aways,” or the people who evaded border defenses. In April, roughly 40,000 job-seeking migrants — including some global migrants — sneaked across the border, and the May got-away number is likely to be somewhat larger.

The DHS-approved inflow comes as U.S. employers plead for more foreign workers to help stop Americans from getting wage raises.

The New York Times reported June 9: “In May, in an effort to hire 20,000 employees in a tight labor market, Chipotle said it was raising wages and would pay workers from $11 to $18 an hour … In May, McDonald’s said it was raising hourly wages for current employees by an average of 10 percent.”

The DHS website shows that 180,000 migrants were recorded arriving at the border in May, up by eight times since May 2020.

Of the 180,000 arrivals, roughly 110,000 were turned back under the Title 42 anti-disease rules. Nearly all of the 110,000 were sent back to Mexico — the five yard-line of the Hunger Games migration trail — instead of being flown back to their distant homes.

The DHS data shows that 67,732 migrants were invited into the United States under Title 8 immigration rules, under guidance from Joe Biden’s DHS chief, Alejandro Mayorkas.

That is 29 times as many migrants who were accepted in May 2020.

Mayorkas pulled the economic migrants through the border via legal side doors that were designed for small numbers of victims of political or religious persecution, stranded travelers, victimized children, and injured voyagers.

Mayorkas’s side-door strategy has yet to be reviewed by judges.

When the number of got-aways is included, Mayorkas’s half-open border policies likely added roughly 100,000 workers who can be hired by employers at very low wages for myriad jobs, including jobs at Chipotle and McDonalds.

Most of those migrants are looking for jobs — including most of the so-called “Unaccompanied Alien Children” (UAC).

Most of the UACs are teenage male migrants who want and need jobs — to pay their smuggling debts, to aid their families at home, to help smuggle relatives into the United States, and to do better for themselves. Since October, Biden’s deputies have accepted 60,000 UACs, even though the vast majority are seeking jobs or to join relatives who are illegally living in the United States.

The admitted 67,732 migrants in May also includes 27.981 people from El Salvador, Guatemala, and Honduras. That Central American population included 10,765 “Unaccompanied Alien Children” who were delivered to the border by coyotes, plus 15,72 adults with young children, plus 1,642 single adults.

But the 67,732 inflow also includes a massive spike in the number of migrants from outside Mexico and Central America.

Mayorkas excluded only 8,000 of the 40,000 global migrants. The vast majority of the 8,000 will try to sneak into the United States, and if returned to Mexico, will try again and again until they succeed.

Business groups are strenuously lobbying Biden’s administration for more imported workers — and Mayorkas is delivering, despite the economic harm inflicted on the Americans who accepted him as a refugee in 1960. The New York Times described June 5 how the apparent shortage of workers has shifted power from employers to employees, so giving ordinary Americans more wages, status, and dignity:

The relationship between American businesses and their employees is undergoing a profound shift: For the first time in a generation, workers are gaining the upper hand.

The change is broader than the pandemic-related signing bonuses at fast-food places. Up and down the wage scale, companies are becoming more willing to pay a little more, to train workers, to take chances on people without traditional qualifications, and to show greater flexibility in where and how people work.

in key respects, the shift builds on changes already underway in the [President Donald Trump’s low-migration] tight labor market preceding the pandemic, when the unemployment rate was 4 percent or lower for two straight years.

Biden is praising the wage increases even as he encourages more of the migration that will cut Americans’ wages.

Courtesy of Biden and Mayorkas, many more migrant workers are coming to U.S. jobs — even as many are dying on their long treks.

Meanwhile, Mayorkas told a meeting of left-wing lawyers that he is putting the “dignity” of migrants foremost in DHS policy — and likely far ahead of his unmentioned concerns about Americans’ wages.