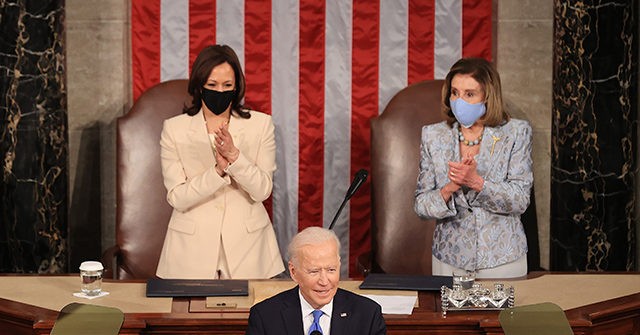 President Joe Biden will deliver his first address before a joint session of Congress on Wednesday evening, where he will ask lawmakers for an additional $1.8 trillion for his children and family care and education.

Biden will use his primetime speech to pitch his $2.3 trillion “infrastructure” bill, which would be paid for with higher taxes on corporations. The president will also tout his administration’s action on combating the coronavirus pandemic. The House chamber will not be filled to its usual capacity due to coronavirus protocols.

**Follow all of the events on the Breitbart News Live Wire below. All times in eastern.**

And Biden’s UN Ambassador Linda Thomas-Greenfield delivered remarks at a Chinese Communist Party-funded Confucius Institute and refused to call China’s slaughter of the Uyghurs a genocide.

9:17 P.M. — Biden claims his administration is on track to reduce child poverty by half, but does not elaborate how.

President Biden says his administration is on track to cut child poverty in half. #JointAddress

No official “designated survivor” for President Biden's address tonight, because reduced capacity means most Cabinet members not in attendance. But if there was an attack and all those in the Capitol perished, Treasury Secretary Janet Yellen would become president.

9:15 P.M. — “There’s still more work to do to beat this virus. We can’t let our guard down,” Biden says. “But tonight, I can say, because of you, the American people, our progress these past 100 days in one of the worst pandemics in history has been one of the greatest logistical achievements in history.”

President Biden: “There's still more work to do to beat this virus…but tonight I can say because of you – the American people – our progress has been one of the greatest logistical achievements this country has ever seen.” #JointAddress
LIVE UPDATES: https://t.co/fWE9llcFqX pic.twitter.com/FuU8j5Qdqg

BIDEN: “Go get vaccinated, America! Go and get the vaccination. They're available.” #JointAddress pic.twitter.com/5g2EPK8BdK

9:10 P.M. — Biden, who often touts the importance of unity, takes veiled shot at former President Donald Trump, saying: “America is rising anew. Choosing hope over fear. Truth over lies. Light over darkness. After 100 days of rescue and renewal, America is ready for takeoff in my view.”

And there is the Biden line that will be played countless times: “Now, after just 100 days, I can report to the nation: America is on the move again.” #JointAddress

Biden: “Madame Vice President…Nobody has ever said those words from this podium.” pic.twitter.com/QLqLTdSAZl

9:06 P.M. — Biden has entered the chamber and is first bumping lawmakers, including Sen. Bernie Sanders (I-VT).

WATCH: Pres. Biden enters into the chamber ahead of the #JointSession of Congress.

He is announced by the newly sworn-in house sergeant at arms, Major General William Walker, the first African American to serve in the role. pic.twitter.com/UikR9Wlqtl

Secretary of State Blinken and Secretary of Defense Austin are the only representatives of Biden's Cabinet in the House chamber tonight.

8:50 P.M. — Biden will refer to the January 6th riot at the U.S. Capitol as “the worst attack on our democracy since the Civil War” in his remarks. Breitbart News’ Joel Pollak fact-checks this claim, writing that it’s absolutely false.

Biden to refer to Jan 6 insurrection as “the worst attack on our democracy since the Civil War” in speech tonight. pic.twitter.com/rW6L2ybDRQ