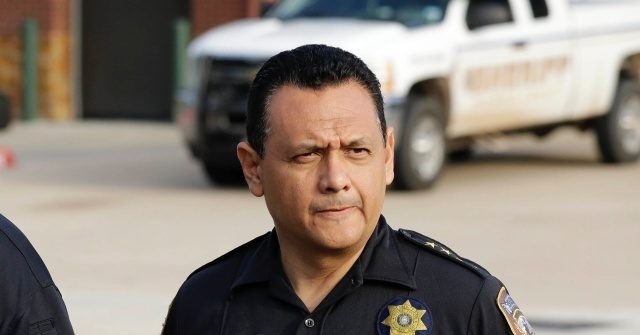 “With a distinguished career in law enforcement and public service, Sheriff Gonzalez is well-suited to lead ICE as the agency advances our public safety and homeland security mission,” Mayorkas said. “I hope the Senate will swiftly confirm Sheriff Gonzalez to this critical position.”

In 2017, as Breitbart News reported, Gonzalez made national headlines when he ended Harris County’s 287(g) agreement with ICE — the program that allows local law enforcement to seamlessly turn criminal illegal aliens over to ICE agents.

“After thoughtful consideration, I’ve decided to opt-out of the voluntary 287(g) program,” Gonzalez told the Houston Chronicle at the time. “We’ll still be cooperating with local, state, and federal authorities as we always have, we just won’t have our manpower resources inside the jail doing that.”

Yet, the decision did not impact Harris County’s cooperation with ICE, as Gonzalez’s department told Breitbart News in 2017 they would continue complying with ICE when agents requested criminal illegal aliens be turned over to federal custody, and they even welcomed ICE to place an agent in the local jail to help facilitate such transfers.

While Gonzalez continued cooperation with ICE, he lobbied state lawmakers and Gov. Greg Abbott (R) to veto a ban on sanctuary cities in April 2017 and criticized the law after Abbott signed the legislation in May 2017.

In a joint op-ed in the El Paso Times, Gonzalez claimed a ban on sanctuary cities in Texas was the “result of anti-immigrant grandstanding” and argued it would hurt public safety:

Immigrants who are here are significantly less likely to commit crimes. In fact, FBI crime statistics have found that labeled “sanctuary” cities experience lower rates of all crime types, including homicides.

SB 4 goes wrong because it fundamentally functions with the assumption that the state government knows what is best for our local communities; it ignores our familiarity with our own cities and counties, and how to keep them safe. Our government is ideally designed to have the power of federal officials balanced with state and local authority.

This bill is a result of anti-immigrant grandstanding and will strip local law enforcement of our designated power and ability to protect and serve our communities. We ask that the Texas House of Representatives reject SB 4 and any initiative to force local law enforcement to carry out the responsibilities of the federal government.

After Abbott signed the sanctuary city ban into law, Gonzalez said, “The damage is done with the passage of the law.”

During increased interior immigration enforcement from 2017 to 2020 under former President Donald Trump’s administration, Gonzalez was critical of ICE and DHS.

Following ICE raids in 2019, Gonzalez wrote online that he opposed ICE raids that were not targeted to only illegal aliens who “represent a threat” to the United States:

I do not support #ICERaids that threaten to deport millions of undocumented immigrants, the vast majority of whom do not represent a threat to the U.S. The focus should always be on clear & immediate safety threats. Not others who are not threats. @HCSOTexas does not participate.

Likewise, when the Trump administration was enforcing its “Zero Tolerance Policy” at the U.S.-Mexico border, Gonzalez commented that the plan was threatening public safety:

Family separation threatens to undermine community trust in state and local law enforcement, making it easier for criminals to prey upon immigrant communities, which poses a threat to public safety more broadly. #KeepingFamiliesTogether

Gonzalez’s nomination comes after Biden gutted interior immigration enforcement and placed limits on the arrests and deportations ICE agents can conduct. Through a series of “sanctuary country” orders, Biden is preventing ICE agents from deporting illegal aliens who are not terrorists, known gang members, or recently convicted aggravated felons.