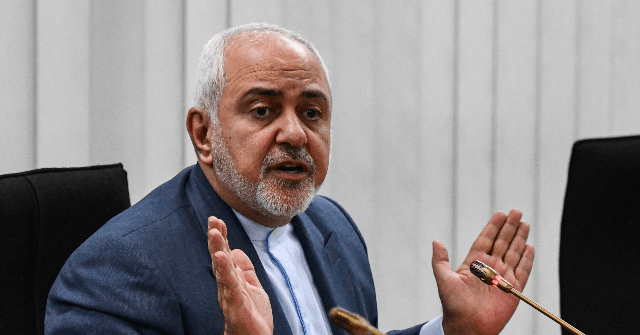 Major Gen. Qasem Soleimani was the head of the IRGC Quds Force, tasked with executing Iran’s international terrorism policies. A U.S. drone strike eliminated Soleimani and the head of the Hezbollah Brigades, an Iraqi terrorist militia, in Baghdad on January 2020.

Three hours of an extensive conversation between Zarif and pro-regime journalist Saeed Laylaz, reportedly recorded in March 2021, leaked to the London-based outlet Iran International on Sunday. Most of Zarif’s remarks focused on Soleimani. Zarif repeatedly protested Soleimani usurped Zarif’s power and set Iran’s diplomacy while Zarif had “nil” influence on the country’s foreign policy. He specifically complained that Soleimani held meetings with Russian officials that actively undermined Zarif’s efforts to get the 2015 Iran nuclear deal, formally the Joint Comprehensive Plan of Action (JCPOA), while talks were underway.

Zarif’s comments are the most antagonistic statements by any Iranian official revealed so far regarding Soleimani. Tehran declared Soleimani a “martyr” and has effectively outlawed any negative remarks about the slain terrorist in the country.

The Iranian Foreign Ministry confirmed following the leak that the remarks were authentic but protested that Iran International had “cherry-picked” the quotes from the interview. President Hassan Rouhani has vowed an investigation into the alleged theft of the audio tapes, which Tehran insists were meant to be used in an “oral history” project and were strictly off the record.

While Iran has largely stood by Zarif, signs that he may be facing internal pressure surfaced Wednesday. Zarif, currently on a diplomatic visit to Iraq and Qatar, posted an emotional tribute to Soleimani on his Instagram account. April 28 has no particular significance in the life and mythology of Soleimani or the IRGC; the post is likely meant to dilute the insults in his leaked remarks.

“I have been shouting out the vigor, humanity, pacifism and courage of Martyr Soleimani, not just before the great people of Iran and not only today, but before the entire world and for more than two decades,” Zarif proclaimed online. “I have pointed out time and again that if peace has been established in Afghanistan and Iraq and if Daesh’s [ISIS] terrorism has been defeated, more than anything else, it is owed to the wisdom and courage of General Soleimani and the bravery and self-sacrifice of the people of those lands.”

The commentary also appeared to be an apology for tone, but not content. In remarks not translated to English by state-run PressTV but appearing in the original Farsi post, Zarif wrote, “in expressing my expert opinion, I have considered seeking forgiveness, appeasement, and self-censorship as betrayal, which I have learned from our Imam Ali (as): ‘Indeed, the greatest betrayal is the betrayal of the ummah [Islamic community], and the ugliest deception is the deception of the leaders.'”

Zarif goes on to insist that the IRGC and the diplomatic wing of the Iranian Islamic regime are complimentary, not rivals.

“Protecting the interests of the country and the resilient, patient, and brave people of Iran is a covenant that I will adhere to until my last moment,” Zarif concluded.

The commentary was accompanied by a video of Zarif bowing before a memorial built in Baghdad to Soleimani and Abu Mahdi al-Muhandis, the Hezbollah Brigades chief who died in the same airstrike. While a terrorist organization, the Hezbollah Brigades became a formal wing of the Iraqi military as part of the larger Popular Mobilization Forces (PMF) during the war to dismantle the Islamic State’s “caliphate” in the country.

PressTV, in describing Zarif’s disparaging remarks about Soleimani, claimed he “repeatedly hailed General Soleimani’s regional activities and underlined his close cooperation with him throughout years.”

“However, the comments led to a fierce debate within the country, with many questioning his stance regarding General Soleimani’s regional role,” the outlet claimed.

Upon his return to Iran, Zarif will be forced to answer for his remarks before the Iranian Parliament’s Foreign Affairs and National Security Commission.

“I have asked Mohammad Javad Zarif to attend the first meeting of the [parliament] Foreign Affairs and National Security Commission,” commission spokesperson Abolfazl Amoei said this week, according to the Kurdish outlet Rudaw. “Offering explanations about the leaked file as well as responses to the functions of the foreign ministry are the main subjects of the meeting.”

Rudaw reported that IRGC media and its leadership are reportedly pressuring the regime to punish Zarif and force him to take a “pledge of allegiance” to Soleimani, potentially antagonizing much of the regime’s civilian apparatus.

Rouhani appeared to address this rift in remarks Wednesday to his cabinet in which he urged focus on the true enemies of Iran outside of the country. Rouhani described Iran International as the “dirtiest” media outlet and blamed Saudi Arabia, without evidence, for the scandal.

“The audio tape has been released by those who are against Iran, people of Iran and the interests of Iran at the exact juncture that (JCPOA negotiations in) Vienna is at the height of success, in order to create division in the country,” he claimed, adding vague attacks on the “Zionist regime” (Israel) and the United States.

Rouhani also praised the late Soleimani as the “best adviser” on diplomacy, an apparent jab at Zarif, whose job is to be Rouhani’s top diplomatic adviser.