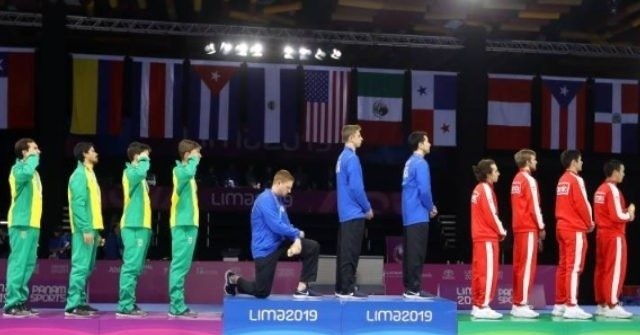 Last week, the International Olympic Committee announced that it would maintain Rule 50, which forbids any demonstration related to political, social, or religious protest at any venues, including at the Summer Games in Tokyo, Japan, in July.

This includes the ‘Take a Knee’ protests often seen at sporting events in the United States to protest so-called police brutality and racial injustice.

The Daily Mail reported on the announcement:

Against the backdrop of the Black Lives Matter movement protesting racial injustice, calls have increased in recent months for a change to that rule that would allow athletes to protest.

Some international federation chiefs, including World Athletics’ President Sebastian Coe, have said that athletes should have the right to make gestures of political protest during the Games.

The IOC’s Athletes’ Commission chief Kirsty Coventry, who led a review of the rule, said the majority of athletes consulted were against any protests within the fields of play or the podiums.

“I would not want something to distract from my competition and take away from that,” Coventry, a former Olympic swimming champion, said at a virtual meeting on the rule. “That is how I still feel today.”

Coventry said in the Mail article that there were a series of recommendations approved by the IOC’s Executive Board on Wednesday, including providing clarity on sanctions, additional information about Rule 50, a change in the wording of the Olympic Oath to include messages about inclusion, and producing athlete apparel that promotes inclusion, according to the Mail.

Coventry also confirmed that athletes who don’t comply with Rule 50 would face consequences.

“Yes, that is correct,” Coventry said. “That is also because of the majority of athletes we spoke to. That is what they are requesting.”

The IOC’s recommendations result from a process that began in June 2020, with some 3,500 athletes taking part, the Daily Mail reported, adding that 70 percent of those athletes are against protests at the Games.