When things go south, deny everything.

That appears to be the current strategy of Hillsong megachurch’s senior pastor and founder, Brian Houston. He has taken to Twitter and reportedly internal email groups to dismiss the existence of a $20 million lawsuit against the church, as well as The Post’s reporting on alleged misuse of tithing money by pastors at the Australia-based institution’s American branches.

“If anyone out there is even interested. Hillsong is NOT being sued for 20 million dollars. This story is completely untrue,” Houston, 66, tweeted Tuesday, offering no evidence to prove the New South Wales Supreme Court suit filed by Rosebery, Australia, homeowners against a Hillsong developer does not exist.

Houston has also apparently taken up a denial-based public relations campaign via email, reportedly messaging congregants on Monday to say that former members’ accounts of pastors’ spending habits were lies.

“We are particularly grieved that, in many cases, inaccurate accounts in these stories have been reported as if they are true,” Houston allegedly wrote in the email blast, which was obtained by The Post, rehashing that the scandal-ridden megachurch knows “many of the stories circulating are not true.” The email then launches into a bulleted list of various ways the church upholds its “biblical responsibility” to be financially ethical, including such vague statements as “careless spending is not permitted” and “team salaries are moderate.”

The email ends with a reminder that Vision Sunday — a large, annual event when many congregants make donation commitments for the year (“Salvation is flowing,” a promotional trailer declares) — is “just around the corner.” 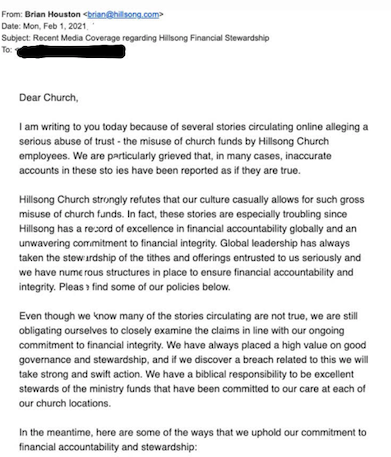 An email allegedly written by Brian Houston and then sent to Hillsong congregants on Monday.

An email reportedly sent by Brian Houston to Hillsong congregants.

While Houston maintains that Hillsong’s financial and legal integrity are intact, the megachurch has launched an “independent and external review” regarding “issues” at the church’s eponymous college, according to an email sent to a former student and viewed by The Post.

“Following the large amount of feedback that Hillsong College received at the end of last year, I am writing to update you on the steps that the College is taking to clarify and act on this feedback,” reads the email. “Hillsong College has appointed a law firm, HWL Ebsworth Lawyers, an independent external law firm to review allegations made by former students about their experiences during their time at College.”

The email goes on to request that the student participate in a “strictly confidential” interview with the lawyers.

Ex-students have previously told The Post their experiences at the school were traumatizing.

“It felt like a reality show — it’s really a cult,” Sydney-based interior designer Yolandi Bosch said of her experience at Hillsong College in 2012. “They convinced me to drop everything I was interested in becoming.”

Bosch and hundreds of other former staffers, students and volunteers are looking for representation so they can take a complaint of “industrial slave labor” against the college to court.

An Easter service held by megachurch Hillsong in Sydney, Australia.

Anti-Cuomo Johnny-come-latelies and other commentary

Cramer says investors are in denial about stocks: 'The sell-off is...

Biden is set to repeat Obama’s Mideast failures — and wipe...

Cramer says investors are in denial about stocks: 'The sell-off is...

Anti-Cuomo Johnny-come-latelies and other commentary