With many Americans still leery of working out indoors while COVID-19 lurks, gyms, fitness studios and personal trainers have been heading into the great outdoors to help keep their businesses alive and kicking.

Trainer Garth Wakeford, who leads outdoor programs for Hamptons Gym on Long Island, New York, said good weather in 2020 has been one of the few bright spots in an otherwise disastrous year for the fitness industry.

“They were closed and needed some way to make money. They came up with ‘Outdoor Division,’ which included trail running, mountain biking and turfside fitness,” he said.

Wakeford leads daily training sessions on a 1,200 square-foot outdoor turf space. “I don’t mind working in all sorts of weather, so hopefully things will go through Thanksgiving,” he said. “But if there’s snow, for example, there’s nothing you can do unless people are massively hearty.”

For Amy Glosser, the owner of Byklyn, an independent cycling studio in Brooklyn, New York, outdoor classes seemed like a good idea in theory, but came with practical challenges. “It’s hard for a cycling studio to move outside because you can’t just roll out yoga mats. We have heavy infrastructure, and music is also key to running an outdoor class.”

Then Glosser found a dilapidated yard that, after striking a deal with the owners, she quickly turned into the borough’s first outdoor cycling studio. Bikes are spaced six feet apart and sun shades provide protection from the elements.

“Like all good small businesses, we are scrappy. The turf is used AstroTurf from a soccer field, complete with soccer lines,” Glosser said. 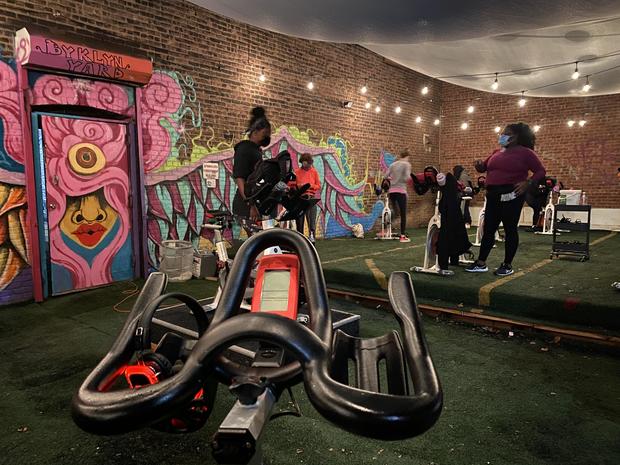 “We keep our neighbors very happy. When you walk by and see a class, the only thing you hear is an instructor giving commands or talking with riders,” Glosser said.

“We ride in the rain as long as it’s not thundering and lightning, but that will change as it gets cold,” she added. “I think it’s an opportunity for New Yorkers to become a little bit like the Dutch and get out there in all kinds of weather and cycle.”

Byklyn patron Annie Scalici, 31, said attending classes outdoors is easier than exercising in isolation in her own home, and she doesn’t yet feel comfortable going back to an indoor gym. “It was cold today, but I came out dripping sweat,” she said.

After closing all of its studios across the U.S. as COVID-19 was spreading this spring, City Row, a high-intensity indoor rowing program with more than a dozen studios around the country, brought its rowing machines outside. Said City Row founder and CEO Helaine Knapp, “We are meeting the customer wherever they are — at home, in-studio and now outdoors.”

In April, City Row held a grand opening outdoors for its brand new studio in Westlake Village, California. The company was lucky enough to have space right outside its studio to accommodate more than a dozen rowers.

“It was a great way for us to introduce ourselves to the community,” Knapp said. “It looks really cool when you have 15 to 20 rowers and people are rowing in sync. It’s a very rich experience.” 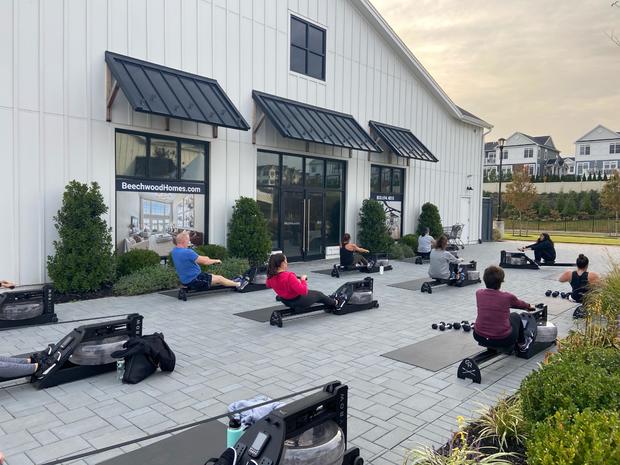 Luxury fitness chain Equinox is also betting that exercise fanatics will embrace outdoor workouts year-round, even after the pandemic ends. The upscale gym recently opened fully-equipped outdoor locations in Century City in Los Angeles and on Manhattan’s West Side.

The facilities, which aim to replicate the indoor gym experience, are replete with tented areas for group fitness, treadmills, free weights and turf areas, images on its website show.

Back in Brooklyn, Glosser recognizes that Byklyn’s outdoor pop-up won’t be permanent, given that she doesn’t yet know if or how she’ll heat the space when temperatures start to drop.

“It’s our sandcastle, because it is going to end. It’s going to snow at some point but we will be here as long as we can and it was worth it to create a beautiful community space.”

Traditional America Values CAN be Reinstated and Preserved – But Only IF…

Traditional America Values CAN be Reinstated and Preserved – But Only...

Traditional America Values CAN be Reinstated and Preserved – But Only...