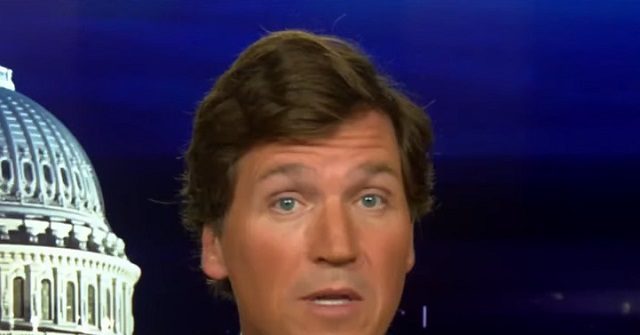 Monday, FNC host Tucker Carlson said the federal government was spying on him and those associated with his program, which Carlson said was revealed through a whistleblower within the government.

According to Carlson, the proof was the whistleblower revealed details of a story they had been working on that could have only been known through texts and emails.

Carlson said his team had filed a Freedom of Information Act request and called on the federal government to cease the behavior immediately.

CARLSON: So, Joe Biden told us recently that the single gravest terror threat this country faces is not Islamic radicalism, ISIS or al Qaeda, as the government has told us for 20 years now. It’s not the brutal mobs of race extremists who burned and looted our cities last summer, BLM and Antifa, as — if you’ve been paying attention — you’d assume it would be, of course. They’re the ones who burned the cities.

No, it’s none of that. The main threat we face as a nation, Biden told us, is white supremacy — white American terrorists. Our intelligence and law enforcement agencies have concluded that, the president said. It’s an established fact.

Strangely, that’s all Biden told us. He never said who these white supremacists were. He didn’t explain what they believe, or what they plan to do to America. He announced no arrests. He didn’t name a single person or organization. Who is the white Osama bin Laden? Joe Biden didn’t say. Neither did his attorney general, Merrick Garland, when he reiterated Biden’s claim several days later.

So, the rest of us are left to wonder: Who exactly are these domestic terrorists? We still don’t know the answer. Neither do many longtime FBI agents, as we learned this weekend when we spoke to a couple of them. Biden’s claim is absurd, they told us. It’s not even close to true.

In recent years there have been so few crimes committed by avowed white supremacists, that the FBI strongly considered dismantling the office within the domestic terror division that investigates white supremacist groups. As the agents put it, “The number of cases the program manager had didn’t justify the position. There was nothing for him to do.”

For decades, by contrast, the greatest domestic terror threat has come from radical environmental groups. They commit the most crimes. Look it up. White supremacists are at the bottom of the list. Federal statistics prove this. Americans are much more likely to die from a lightening strike than at the hands of a white supremacist. White supremacy may be ugly. Many opinions are. But it’s not a meaningful threat to the nation. Claiming otherwise is a lie.

So why does the Biden administration persist in telling that lie? Well it’s a racial attack, obviously. It is waged for partisan political purposes. Tell black voters that Republicans are the KKK, and maybe they’ll keep voting for you. That’s the idea. It’s certainly easier than fixing Chicago or raising test scores, which they should be doing. But there’s also a deeper significance. The Biden administration is signaling a very real change to actual federal policy. The war on terror, now ongoing for 20 years, has pivoted. It’s now being waged against American citizens — opponents of the regime.

We saw this on display on January 6. We told you a couple of weeks ago, based on the language in publicly-available indictments, that the FBI clearly had foreknowledge of the riot at the Capitol that day. The agents we spoke to this weekend confirmed that’s true.

Quote: “The FBI had sources in that crowd — confidential courses, snitches. That’s 100% certain.”

But it’s not just political protesters the government is spying on.

Yesterday, we heard from a whistleblower within the U.S. government, who reached out to warn us that the NSA, the National Security Agency, is monitoring our electronic communications, and is planning to leak them, in an attempt take this show off the air. Now, that’s a shocking claim, and ordinarily we’d be skeptical of it. It’s illegal for the NSA to spy on American citizens. It’s a crime. This isn’t a third-world country. Things like that shouldn’t happen here. But, unfortunately, they do — and in this case, they did.

The whistleblower, who is in a position to know, repeated back to us information about a story we’re working on that could only have come directly from my texts and emails. There’s no other possible source for that information, period. The NSA captured it without our knowledge for political reasons. The Biden administration is spying on us. We’ve confirmed that.

This morning we filed a FOIA request, a Freedom of Information Act request, asking for all information the NSA and other agencies have gathered about this show. We did it mostly as formality. We contacted the press office at the FBI and the NSA. We don’t expect to hear much back. Only Congress can force transparency on the intelligence agencies — and they should, immediately. Spying on opposition journalists is incompatible with democracy. If they’re doing it to us — and again, they are definitely doing it to us — they’re almost certainly doing it to others. This is scary, and we need to stop it right away.