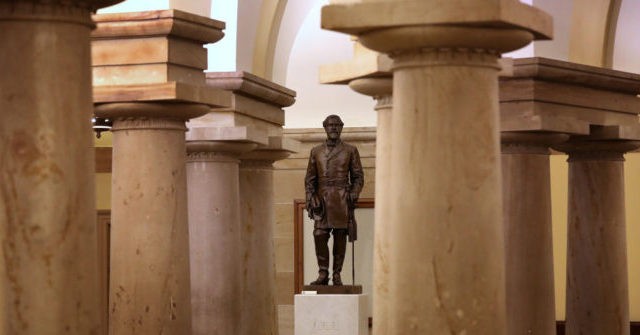 The Democrat-led House on Tuesday voted to remove Confederate statues from the U.S. Capitol — a move House Minority Leader Kevin McCarthy (R-CA) mocked Democrats for, accusing them of attempting to hide their party’s “shameful” racist past.

Democrats, joined by 67 Republicans, voted 285-120 in favor of a measure that would remove statues of those who supported the Confederacy, as well as the bust of Chief Justice Roger Taney for his role in the 1857 Dred Scott v. Sandford decision, which excluded black people from citizenship.

“We can’t change history, but we can certainly make it clear that which we honor and that which we do not honor,” Majority Leader Steny Hoyer (D-MD) said. “Symbols of hate and division have no place in the halls of Congress.”

McCarthy did not mince words, accusing Democrats of hiding their “shameful” racist past.

“Let me state a simple fact. All the statues being removed by this bill are statues of Democrats,” he said, suggesting that the bill should “go further.”

“Maybe it’s time the Democrats change the name of their party,” he said, emphasizing during the House floor speech that America is not a racist nation.

“America is not a racist country. America must reject Critical Race Theory for the simple reason [that] state-sponsored racism is wrong and always will be,” the minority leader said.

This is far from the left’s first attempt at erasing history. Last year, during the Black Lives Matter riots, protesters targeted historical statues, even decimating depictions of Abraham Lincoln and defacing the Shaw 54th Regiment Memorial to black soldiers in the Civil War. Protesters in Madison, Wisconsin, even toppled a statue of an immigrant, Col. Hans Christian Heg, who died fighting for the Union against slavery.

The measure now moves to the Senate, where Democrats need ten Republicans to join them in their efforts to avoid a filibuster.

Last summer, House Speaker Nancy Pelosi (D-CA) ordered the removal of four portraits of former speakers who served in the Confederacy, all of whom were Democrats.

“We didn’t know about this until we were taking inventory of the statues and the curator told us that there were four paintings of speakers in the Capitol of the United States, four speakers who served in the Confederacy,” she told reporters at the time.

“So tomorrow, Juneteenth, the clerk will oversee removal of those Confederate speakers,” she continued, adding there is “no room in hallowed halls of democracy, this temple of democracy, to memorialize people who embody violent bigotry and grotesque racism of the Confederacy.”

Interestingly, amid the uproar over “racist” statues and portraits, Pelosi had remained silent on her father’s role in overseeing the dedication of the Stonewall Jackson and Robert E. Lee Monument while serving as the mayor of Baltimore in 1948.

“At the time, the Speaker’s father said people could look to Jackson’s and Lee’s lives as inspiration and urged Americans to ’emulate Jackson’s example and stand like a stone wall against aggression in any form that would seek to destroy the liberty of the world,'” as Breitbart News detailed.

Biden On Past Statement About Vaccinated Not Needing Masks: Was ‘True At The Time’

Biden On Past Statement About Vaccinated Not Needing Masks: Was ‘True...

Biden On Past Statement About Vaccinated Not Needing Masks: Was ‘True...