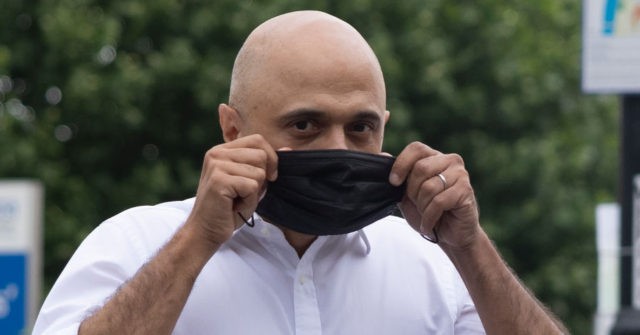 In case you missed it, the United Kingdom has a new Health Secretary.

But don’t be fooled by the hype. Yes, the new one looks slightly different. Mk II Bio Security State Bot has a shiny bald pate and a smile moderately less terrifying than Mk I Bio Security State Bot’s psychopathic rictus grin. Scratch beneath the surface though and the truth becomes depressingly clear: Sajid Javid is going to be at least as dreadful as Matt Hancock.

Javid gave us a big clue during his first floor speech in parliament as Health Secretary, when he just couldn’t resist wheeling out that toxic signature phrase of the globalist elite ‘Build Back Better.’

New Health Secretary Sajid Javid says Step 4 of England’s road map out of lockdown will not be brought forward but added “we see no reason to go beyond the 19th of July”.

Up until that point, it had all been going deceptively well. The mainstream media’s narrative (which by handy coincidence is also the government’s narrative) is that Sajid Javid is a welcome change from Hancock because, supposedly, he is a ‘lockdown sceptic’ who just wants to get the country back up and running again.

To further this narrative, Javid made some encouraging noises about the impossibility of eliminating Coronavirus altogether (so: not one of those Zero Covid zealots) and about the vital importance of opening the country on 19th July.

The Prime Minister has called it our terminus. For me 19th July is not only the end of the line but the start of an exciting new journey for the country.

Unfortunately for the narrative, though, Javid could not resist letting the cat out of the bag in his subsequent exhortation.

We must keep on our road map to freedom so that together we can beat this pandemic and Build Back Better.

Better than what, exactly?

Better than the old world we used to live in where we could travel freely, meet in pubs without having to put on masks every time we wanted to use the loo, had jobs and a functioning economy, aspired to own our own property, weren’t bullied by our doctors and the media?

Build Back Better is, of course, the code phrase for the World Economic Forum’s Great Reset and has nothing to do with improving our lives. Quite the opposite actually, so it shows some pretty egregious chutzpah on Javid’s part to wheel it out in the same sentence as ‘road map to freedom.’

Build Back Better means, by the WEF’s own admission, a world where we no longer own any property; where, instead of meat we’re forced to eat insects or lab-grown horror mush; where we are, essentially, the equivalent of cattle or slaves to a globalist elite which despises us.

No politician who uses that phrase is unaware of its meaning. They brandish it, increasingly often these days, to show us that they are the masters, that their plan is well on the way to completion and that there’s nothing we ordinary folk can do at this point to stop them.

Javid got the Health Secretary’s job not because he is a breath of fresh air but rather because he is the same stale old fart from the same crowded lift.

Javid is a paid up member of the bankster elite (he was a managing director at Deutsche Bank).

Javid is an opportunistic virtue-signaller, as for example when he appeared to take the side of Ilhan Omar against Donald Trump .

Javid, despite being touted as a ‘lockdown sceptic’ has NEVER voted against this government on any of its draconian coronavirus measures – not even from the safety of the backbenches when he might have been able to show his independence.

Sajid Javid is just another low-level cabal enforcer. He will not be an improvement on Matt Hancock. He is just there to give the illusion of change and to provide false reassurance to the gullible that things are going to get better and that the country is going to be open for business permanently very soon. They won’t. Worse, far worse, is yet to come.