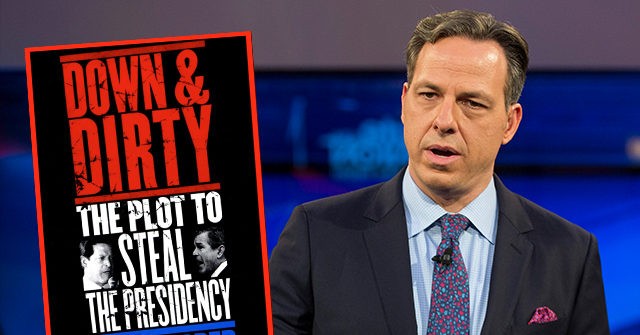 CNN’s Jake Tapper declared Friday that he had banned guests, including Republican leaders, who had questioned the results of the 2020 presidential election — though he wrote a book about how the 2000 election was purportedly stolen.

As Breitbart News noted in November:

Tapper’s book, Down and Dirty: The Plot to Steal the Presidency, is still available on Amazon.com. A blurb describes the book as claiming that “both sides, Democrats and Republicans, plotted to steal the presidency in 2000.”

At the time, Tapper was the Washington correspondent for the left-wing online magazine Salon.com. He later worked for ABC News as a White House correspondent before landing a new role at CNN, hosting The Lead with Jake Tapper and State of the Union.

The CNN anchor drew wide condemnation Monday for suggesting that Trump staffers who did not abandon the president in his legal and electoral fight ought to be blacklisted from further employment in the political world.

After Tapper announced his ban, several Republicans affected by it — including Rep. Elise Stefanik (R-NY) — produced emails showing that his CNN show had attempted to book them throughout 2021, including in the past several days.

Tapper blamed his staff, saying that “the bookers” had invited guests without his knowledge.

Joel B. Pollak is Senior Editor-at-Large at Breitbart News and the host of Breitbart News Sunday on Sirius XM Patriot on Sunday evenings from 7 p.m. to 10 p.m. ET (4 p.m. to 7 p.m. PT). He is the author of the new e-book, We Told You So!: The First 100 Days of Joe Biden’s Radical Presidency. His recent book, RED NOVEMBER, tells the story of the 2020 Democratic presidential primary from a conservative perspective. He is a winner of the 2018 Robert Novak Journalism Alumni Fellowship. Follow him on Twitter at @joelpollak.