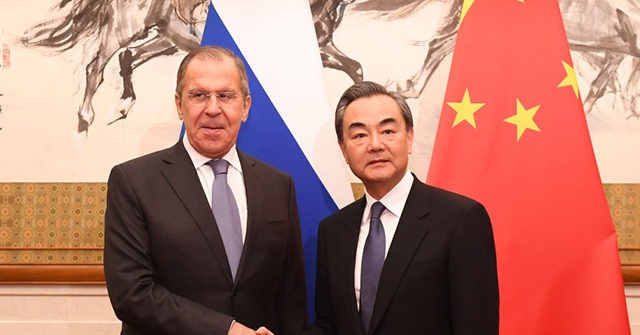 Chinese Foreign Minister Wang Yi celebrated the Communist Party’s alleged conclusion of “the days when a few Western powers could wantonly interfere in China’s internal affairs” in a meeting with Russian counterpart Sergei Lavrov on Tuesday.

Tuesday was the fourth day since a meeting between Wang and American diplomats in which the Chinese berated the Americans for alleged racism and human rights abuses. The meeting — which, in addition to Wang, featured top Politburo member Yang Jiechi, American Secretary of State Antony Blinken, and American National Security Advisor Jake Sullivan — occurred in Anchorage, Alaska, which Chinese state media and the Foreign Ministry complained was cold and inhospitable. In his remarks, Yang invoked the Black Lives Matter movement to accuse the United States of not having the moral standing to condemn China’s ongoing genocide of Muslim ethnic minorities, particularly the Uyghur people, in the Xinjiang region of the country.

Wang and Lavrov began a multi-day meeting in southern Guangxi, China, on Monday that has largely focused on cooperating to contain the influence of the United States. Wang used his remarks Tuesday to celebrate that, thanks to China’s public attacks against America the week before, the West, in general, had lost its ability to deter China’s violations of international law. Wang was also responding to the European Union issuing sanctions this week on Chinese officials implicated in the Uyghur genocide.

The Russian Foreign Ministry separately published a joint statement by Wang and Lavrov pressuring the United Nations Security Council, where both Russia and China are permanent members, to hold an emergency summit to address the United States.

“At a time of increasing global political turbulence, a summit of the permanent members of the U.N. Security Council is particularly necessary to establish direct dialogue about ways to resolve humankind’s common problems in the interests of maintaining global stability,” the joint statement read in part, according to Reuters.

Lavrov clarified in remarks to the press that, while the statement did not identify the United States by name, the meeting would be an attempt to curtail its campaigns for human rights around the world.

“We noted the destructive nature of U.S. intentions, relying on the military-political alliances of the Cold War era and creating new closed alliances in the same spirit, to undermine the U.N.-centered international legal architecture,” Lavrov reportedly said. “We emphasized that against the background of active attempts by the West to promote its concept of a ‘rules-based world order’, the joint efforts of Russia and China … to preserve the modern system of international law are becoming more and more relevant.”

In a column Tuesday, the Global Times condemned the European attempt at sanctions and blamed U.S. influence for the growing global disgust of China’s genocidal actions in Xinjiang, repeating the talking points Yang brought to the Alaska meeting.

“Guns should be banned throughout the US immediately if according to China’s philosophy of protecting people’s safety. And those who hinder the process should be sanctioned, or even tried in court,” the propaganda newspaper declared.

“This is no basis for China, Russia, and many other developing countries to discuss human rights issues with the West, because what the West really cares about is not human rights, but the right to define human rights one-sidedly,” the Global Times continued. “This is an expression of hegemony in which only the Western countries can set the rules for the world. China and Russia will never allow the West to be this rude and insolent, nor will they succumb to the ambitions of the West.”

China has promoted the Alaska summit with Blinken and Sullivan as a decisive victory. Chinese e-commerce platforms, many of which are controlled by Communist Party members and have close ties to the regime, began selling tote bags, phone cases, and other memorabilia emblazoned with Yang Jiechi quotes from the summit.

“U.S. has no qualification to talk down to China” and “Stop interfering in China’s internal affairs” are among the most popular quotes on the items sold online.

Yang spoke for about 18 minutes at the summit, which unnamed American officials called a violation of summit rules, condemning the United States for alleged racism.

“The challenges facing the United States in human rights are deep-seated. They did not just emerge over the past four years, such as Black Lives Matter,” Yang said. “It did not come up only recently. So we do hope that for our two countries, it’s important that we manage our respective affairs well instead of deflecting the blame on somebody else in this world.”

Chinese state media heartily applauded Yang for “vigorous counterblows to condescending U.S. representatives” in its coverage of the meeting, accusing Washington of “disregard for diplomatic protocol” in part for choosing Alaska, a cold state, as a venue. American diplomats previously explained that Alaska was a halfway point between Beijing and Washington, making it about even travel for both parties.