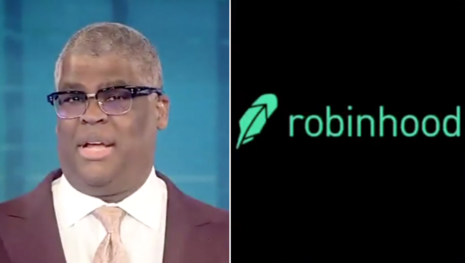 Robinhood is one of a number of brokerages like Webull Financial LLC, E*Trade Financial Corp. and Interactive Brokers Group Inc that placed restrictions on securities like GameStop ($GME) and AMC Entertainment ($AMC). The restrictions only left traders with the option to hold or sell, causing stocks like GameStop to give up some of their massive gains.

Payne ripped Wall Street for its attempt to change the rules of trading after its failed gambit to short GameStop company stock (e.g. “buying the dip”) during the Jan. 28 edition of Making Money with Charles Payne. The short sell strategy backfired after individual investors on Reddit bought up the stock. This caused GameStop stock prices to soar more than 1,000 percent in the past week. Payne said now Wall Street is “changing the rules of the game. In effect, they’ve gone to war with the very clients they lured with the promise of a democratized system. The long knives have come out, shutting down the investing revolution the elites could not control.”

But Payne said the “biggest disappointment” came from Robinhood. Payne laid into the company for its draconian restricting of trading, suggesting the move should even be “illegal”:

[I]f you can only sell stocks, then those stocks only go down. It’s really heartbreaking, and I think it should be illegal to change the rules this dramatically even if it’s somewhere in the fine print.

Payne said that what he could not get, was that if “these stocks that all the experts keep saying are fated to fail, why did Wall Street have to panic? They didn’t just — you know — put a finger on the scale, folks. They removed it altogether.”

Payne said that this was a “terrible day for the establishment that had spent the entire week calling individual investors ‘dumb money,’ and then they change the rules in an attempt to assassinate those newfound freedoms of those so-called ‘dumb money’ investors.”

Robinhood had since eased up on some of the restrictions it had placed on certain securities like GameStop. This caused GameStop’s stock to more than double, according to Fox Business On Jan. 29. There may be legal reasons why Robinhood decided to change course.

The Securities and Exchange Commission (SEC) also just vowed “to protect individual traders and promised to scrutinize actions taken by brokerages [Like Robinhood] that may ‘disadvantage investors or otherwise unduly inhibit their ability to trade certain securities,’” according to CNBC. [Emphasis added.]

Biden is set to repeat Obama’s Mideast failures — and wipe...