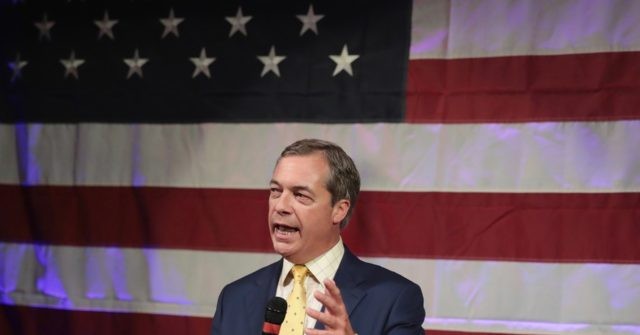 The American right-wing should take solace in the fact that Brexit was ultimately achieved despite years of hurdles and institutional attempts to derail to pro-sovereignty movement, said Nigel Farage.

The Brexit leader said that the political right in the United States has become demoralised after Trump lost to an elderly establishment Democrat despite securing 75 million votes. However, he argued that the success of the liberty-minded Brexit movement in Britain in finally securing independence from the European Union earlier this year should serve as a model of optimism.

“When the Brexit result came through five years ago, everything changed—and I believe it had a huge impact on America,” Farage wrote in Newsweek.

“There is no doubt that the Trump campaign believed Brexit’s key message—that the establishment could be beaten—and that that message was a crucial part of its success in the November 2016 election.”

“I spent many weeks in America in the latter half of 2016 advancing this argument in various media outlets and I know that Donald Trump himself still considers it to be true. Looking back, it is clear that 2016 was an epic year for the populist revolt, and for once it was Britain that led the way.”

The arch-Brexietter, who is currently on tour in America to reinvigorate right-wing activists, said that contrary to 2016 there are “no such feelings of elation among the conservative movement.”

“Worse still, Democrats are threatening to pack the Supreme Court, to add new Senate seats for blue areas and, perhaps, to abolish the Electoral College. As a result, there is an awful sense that the U.S. Constitution is under attack. Some even believe that the future of the United States is at risk,” he wrote.

“At the same time, in social policy terms, the widening gap between the black and white communities—exacerbated by the Marxist Black Lives Matter movement—is causing growing numbers of citizens to flee the big cities. In short, things seem to be in a state of flux,” Farage added.

He said that upon his arrival in the United States, he has spoken to “several members of Congress who are utterly demoralized. But I was able to remind them of the Brexit movement’s own struggles.”

Mr Farage said that “for a while, Brexit seemed lost. It was as though the greatest democratic exercise in Britain’s history was being squandered.”

In 2019 he rejoined the political fray after stepping aside following the 2016 EU Referendum, launching the Brexit Party to challenge Theresa May’s Conservative Party in the European Parliament elections. The Brexit Party swept to a stonking victory, winning 29 seats and ultimately foreshadowed the political downfall of the anti-Brexit former prime minister.

He said that following the 2019 EU elections, the Conservative Party was “forced to act” and installed pro-Brexit Prime Minister Boris Johnson, resulting in the UK finally securing its freedom from the bloc at the beginning of this year.

Farage said that over the six-week tour of nine states, his goal will be to “inspire everybody who attends these events with the story of how we rescued Brexit, and to dispel some of the current negativity within the ranks of America’s conservative grassroots campaigners.”

The Brexit leader, who retired from British electoral politics last month also hinted that he may campaign during the 2022 midterm elections against the Democrats.

“You may wonder: what use can an English Brexiteer be in America? The fact is, I’ve always felt at home in the U.S. and, in business terms, certainly feel closer to the country than I do the continent of Europe,” Mr Farage said.