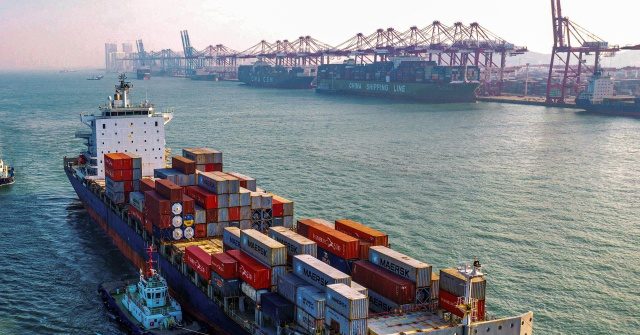 The customs agency for Beijing released data on Monday that showed trade with the United States increasing by 133.4 percent in the first quarter of 2021 to reach $12.5 billion.

Total trade for the city with all partners was up by 8.8 percent from the pandemic year of 2020, and 1.9 percent higher than pre-pandemic totals in 2019.

Growth was especially strong in medical goods, agricultural products, imports of iron ore for China’s heavy industry, and even exported cell phones – a business widely expected to suffer overall due to U.S. bans on China’s telecom giant Huawei over security concerns. According to the Global Times, Beijing’s cell phone exports were up 92 percent over 2020.

Medical exports were 15.2 times higher than the previous year, driven by high worldwide demand for medical goods to combat the Wuhan coronavirus pandemic.

China’s trade growth began accelerating in the fall of 2020, including higher exports to the United States. China reported it had largely returned to pre-pandemic growth levels by the end of the second quarter of 2020, although retail sales were still seen as weak.

The Wall Street Journal (WSJ) observed on Sunday that China is increasingly aggressive about using its trade growth as a political weapon, arguing that as the first to recover from the pandemic, it has become an indispensable trade partner for every major economy.

This aggressiveness has produced a “backlash” from Chinese trade partners such as Australia, which killed two of China’s Belt and Road Initiative (BRI) projects even as economists warned the Australians could not afford to lose the investments they represented. Australian Foreign Minister Marise Paine invoked the authority given to her by Parliament to cancel the two BRI deals because they were “inconsistent with Australia’s foreign policy or adverse to our foreign relations.”

Reuters on Tuesday cited a U.N. analysis that said China’s share of global exports increased almost 15 percent over the past year, but may have peaked now that China’s domestic demands are growing, the cost of labor is rising, and other exporters are emerging from the pandemic.