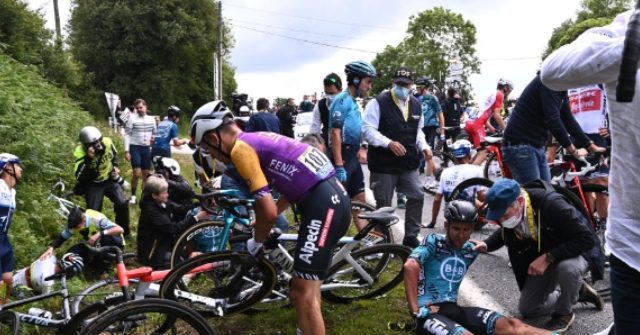 The woman whose attempt to mug for the cameras caused one of the biggest pile-ups in Tour de France history, has been arrested.

On Saturday, during the tour’s first stage, a woman leaned out in front of the riders while holding a cardboard sign. However, the woman got way too close to German rider Tony Martin who collided with her sign and was sent crashing to the ground. Martin’s fall was only the beginning, however, as other riders in the tightly-packed group began falling while trying to avoid him.

What the heck is wrong with this fan?! It’s only Stage 1 of the #tourdefrance! pic.twitter.com/oxeQAK7WVI

The woman’s attempt to cheer on her grandparents – “Allez Opi Omi” translates to “Go Grandpa-Grandma” – triggered a major investigation and her arrest.

The woman turned herself in at a French police station.

According to Reuters, “The spectator is accused of involuntarily causing injury and putting the life of others at risk.”

“The riders union Cyclistes Professionnels Associés released a statement on Tuesday demanding that talks be held with the International Cycling Union and event organizers on how to improve the safety for cyclists, explaining that changes are ‘more necessary than ever,'” the Hill reports.