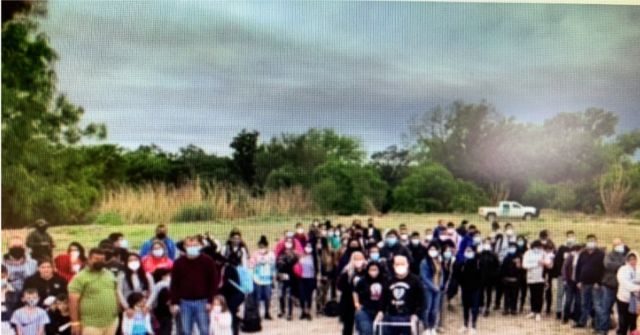 A law enforcement source, speaking on the condition of anonymity, reported the illegal entry of more than 100 Venezuelan nationals south of Del Rio, Texas, early Wednesday morning. The group consisted of mostly family units and was apprehended by Border Patrol. They were transported to nearby stations for processing. Since April 16, Border Patrol agents have apprehended more 1,100 in the area.

On Tuesday, a group of 106 Venezuelans nationals entered in the same area. The groups are entering the United States illegally on a near daily basis.

Most will be summarily released into the community to travel to their destination in the United States. The few single adults within the group will await transfer to ICE for placement in facilities or released under alternatives to detention.

Del Rio, like other cities across the southern border, has seen its share of the increase in migrant traffic. A soft-sided facility was recently opened within the Del Rio Border Patrol Sector to deal with the influx. Del Rio has dealt with large groups of illegal migrants from outside the usual Central American countries normally encountered throughout other border areas.

Because of the relative safety of Ciudad Acuna, directly across from Del Rio, the area is a draw for large groups of Haitians, Cubans, and Central Africans. Cartel violence has slowed in recent years when compared to other cities in Mexico along the border and is the reason many within law enforcement believe Del Rio is the chosen crossing point.

Last month, the Biden Administration granted Temporary Protected Status for Venezuelan nationals for 18 months. The designation applies to those residing in the United States since March 8, 2021. The designation suspends any attempts at removal for the period. Generally, these deadlines are extended–sometimes for years on end. Some critics argue this is a pull factor, encouraging illegal immigration from designated countries.

This group will more than likely be released into the United States to pursue asylum claims even though they would not qualify for the TPS designation. The source reports many of the Venezuelans interviewed during the week directly attributed the suspension of deportations by the Biden Administration as the impetus for their entry into the United States.